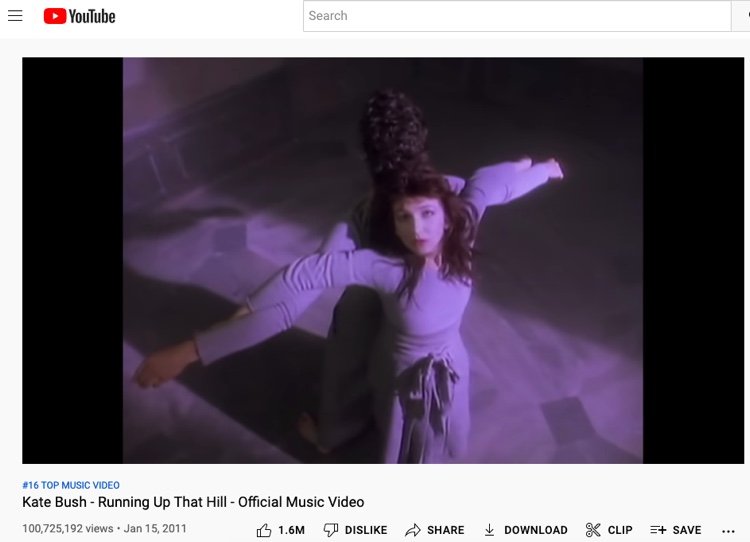 After being included in ‘Stranger Things,’ English singer/songwriter Kate Bush is topping US charts and breaking UK chart records. Now, her official 1985 music video is racking up enough YouTube views to match BTS and younger artists—a phenomenal feat by an older artist, especially one that hasn’t released an album since 2011.

The ‘Running Up That Hill’ official music video has attained a massive YouTube milestone—100+ million views. Touted as a remarkable achievement for a 37-year-old song first published on YouTube in January 2011, this 100 million views mark puts Kate Bush in a league with BTS and a few other young artists.

Moreover, 63-year-old Bush’s ‘Running Up That Hill’ is approaching 500 million plays on Spotify and remains #1 on Spotify’s weekly global chart. Earnings for the track are also skyrocketing.

Surprisingly, ‘Running Up That Hill’ isn’t the only Bush song getting some love. This recent popularity is propelling Kate Bush’s other singles into the spotlight. The relatively young audience of ‘Stranger Things’ appears to be exploring Kate’s other tracks, and her 1978 debut single “Wuthering Heights” is now gaining chart momentum. Last month, the song entered US Spotify Viral 100 chart; last week, it was #4 on the US Billboard Hit 100 singles. Even Bush’s 1895 release “Hounds of Love” topped the Billboard Catalog albums ranking this week.

“Running Up That Hill” gave Kate Bush her first US top 10 37 years after it was released. In an interview with Radio 4 last month, Bush admitted, “I never imagined it would be anything like this.”

It’s highly unusual for an old song to re-enter the charts in this fashion. Originally released in 1985, Bush’s track also broke multiple UK chart records by hitting #1. After first debuting 37 years ago at #3 on the charts, Kate Bush has become the oldest artist to top a singles chart in the UK. This is also the longest a song has taken to get to number one since its release, and the event also marks the longest gap between #1 singles—with 44 years elapsed since her ‘Wuthering Heights’ 1978 release.

The ‘Stranger Things’ feature is not the first time “Running Up That Hill” appeared in a show.

In 2019, the song was included in episodes of HBO’s ‘Big Little Lies,’ Showtime’s ‘On Becoming a God in Central Florida,’ and ABC’s ‘How To Get Away with Murder’ along with the 2018 pilot of FX’s ‘Pose.’

With YouTube views continuing to rack up, it’s clear that the Netflix phenomenon “Stranger Things’ has uncovered an old treasure track to the younger audience.

After this newfound popularity, Kate Bush posted a statement on her website saying that the recent development was “really exciting.”