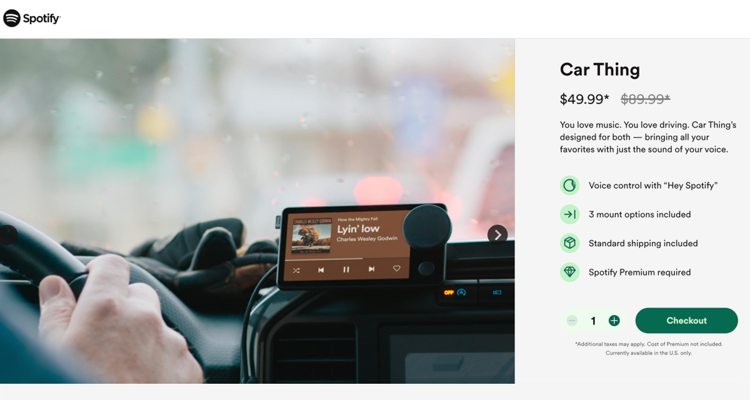 Spotify bows out of the hardware game by discontinuing its ‘Car Thing’ — but continues selling it to buyers who aren’t in the know.

The music streaming giant launched its Car Thing earlier this year — an experimental device aimed at people without Bluetooth capability in their car — with lukewarm success. Now, Spotify is taking a $31.4 million hit in discontinuing the project but continues selling Car Thing at a significant discount to clear out inventory and recoup some of the cost.

If you thought Spotify’s answer to an infotainment system for cars that lack Bluetooth functionality didn’t sound enticing at $89.99, now you can buy one for $49.99 as long the company continues offering them. Spotify says that existing Car Thing units will continue to perform as intended, so purchasing one after the project’s cancellation won’t mean you’re buying little more than a paperweight — as long as Spotify continues to honor that promise.

“The goal of Spotify’s Car Thing exploration was to better understand in-car listening, and bring audio to a wider range of users and vehicles,” Spotify told TechCrunch.

“Based on several factors, including product demand and supply chain issues, we have decided to stop further production of Car Thing units. Existing devices will perform as intended. This initiative has unlocked helpful learnings, and we remain focused on the car as an important place for audio.”

Spotify will continue to gather listening data from Car Things it does sell, so continuing to sell them as long as supplies last isn’t entirely moot. Still, there was very little interest in the hardware with a $90 price tag, so perhaps Spotify will have more luck at the $50 mark.

The Car Thing’s lackluster debut was in no small part due to its awkward and laggy interface. Voice controls seem to be an afterthought on a device meant to be tapped — a bold choice for something intended for use almost entirely while driving.