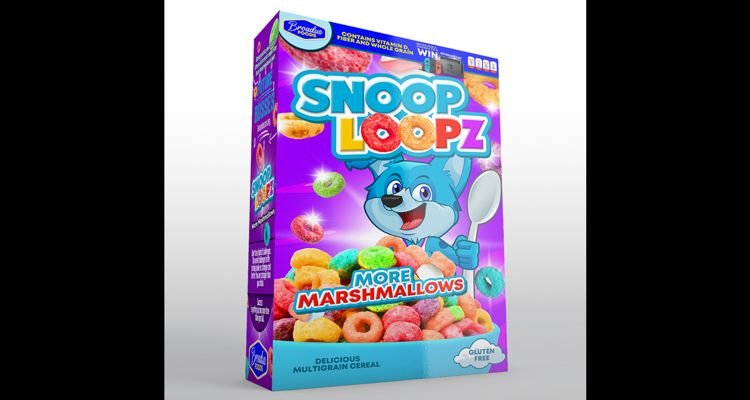 Snoop Loopz cereal are colorful loops paired with marshmallows, and the box features a blue dog mascot posed happily with a big spoon. Details have yet to be revealed on how much the cereal will cost or in which stores it will be available, but the website says purchases “help make a difference” through charities such as Door of Hope.

“Every time you purchase a box of Snoop Loopz Cereal, you are making a difference. We are feeding and empowering families facing homelessness,” says Master P, rapper and Broadus Foods’ CEO. “(We) are committed to inspire economic empowerment by adding diversity into the grocery stores industry and creating opportunities for minority-owned food products and brands.”

Snoop Dogg is known for many things, including his philanthropy. The rapper has coached football for more than 15 years with his Snoop Youth Football League, which inspired him to create the pitch for The Underdoggs. The Underdoggs is a sports comedy from MGM created by Snoop and his longtime collaborator, Constance Schwartz-Morini, with whom he started his football league. The film will star Snoop as Jaycen “2J’s” Jenning and features Kenya Barris of Grown-ish, Black-ish, and #BlackAF fame.

“Giving back to the community through football has taught us so many invaluable life lessons that we’ve been able to share with kids in similar situations like mine when I was growing up,” says Snoop of the film project. “My hope is that this movie will shed light on the realities that kids and adults face in the hood and within the complex world of football.”