What’s the Cost of Controversy for ‘Canceled’ Artists? The Data Deep Dive 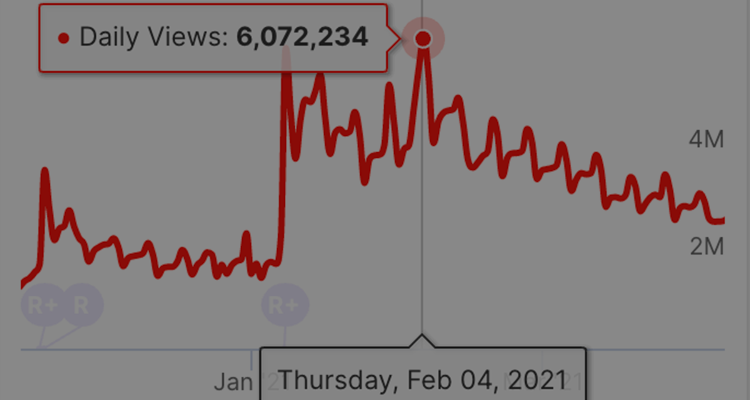 When artists become embroiled in negative news, in what ways does it impact their popularity? Digital Music News takes a look at the cost of controversy with Chartmetric data.

Chartmetric provides a granular breakdown of artist popularity in a way that shows how becoming embroiled in social controversy impacts their popularity and spins. Let’s take a look at a few examples of artists who have faced challenges in the media and how it impacted their overall popularity. We can dro a data deep dive into each of these incidents thanks to Chartmetric data.

A Twitter account that tracks celebrities’ private jet usage shows just how much mega artists like Taylor Swift contribute to CO2 emissions. Swift made the top of the list for musicians’ CO2 emissions, but has that controversy had any direct impact on Taylor Swift’s popularity among her fans?

Some artists are so big, that small controversies like this don’t show up on the radar. There is no discernible loss in monthly listeners or interest in Taylor Swift at all, despite the huge coverage of celebrities’ CO2 emissions. Swift herself even addressed the controversy, saying she’s not always on board and often loans the jet out to friends, family, and for non-profit causes. 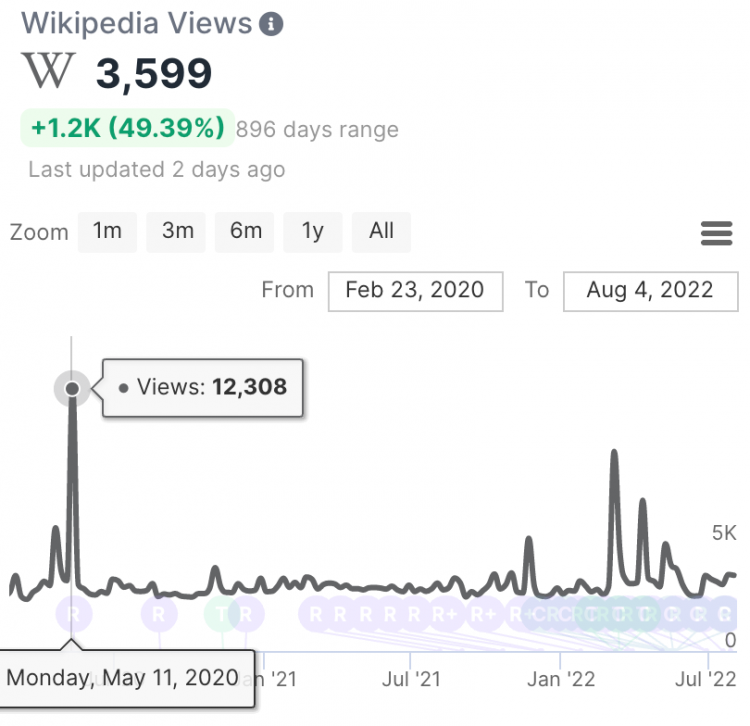 Looking through Bryan Adams’ data on Chartmetric, the only discernible difference we can see is higher than normal Wikipedia views on the day and day after the post sparked controversy and news outlets began picking it up. Most of the Wikipedia activity probably came from people who aren’t familiar with Bryan Adams and decided to look him up. Adams’ streaming and social media presence was relatively unaffected by this event.

This controversy had much more impact on the artist than Taylor Swift or Bryan Adams’ issues. A videotape of country artist Morgan Wallen saying the n-word had instant consequences for the artist. Just a day after the video surfaced, iHeartMedia and Entercom pulled Wallen’s music from the hundreds of radio stations they manage. At the time Morgan Wallen was country’s most popular streaming artist and he was eventually pulled from platforms’ curated playlists – 14 playlists on Spotify and 21 on Apple Music.

Wallen’s label Big Loud Records also suspended his recording contract ‘indefinitely’ and Wallen was banned from attending several awards shows in 2021. So how did the controversy impact Morgan Wallen’s streaming numbers, since action was taken to remove his music from playing? Pandora data plays a big role in country music streaming numbers, so let’s take a look. 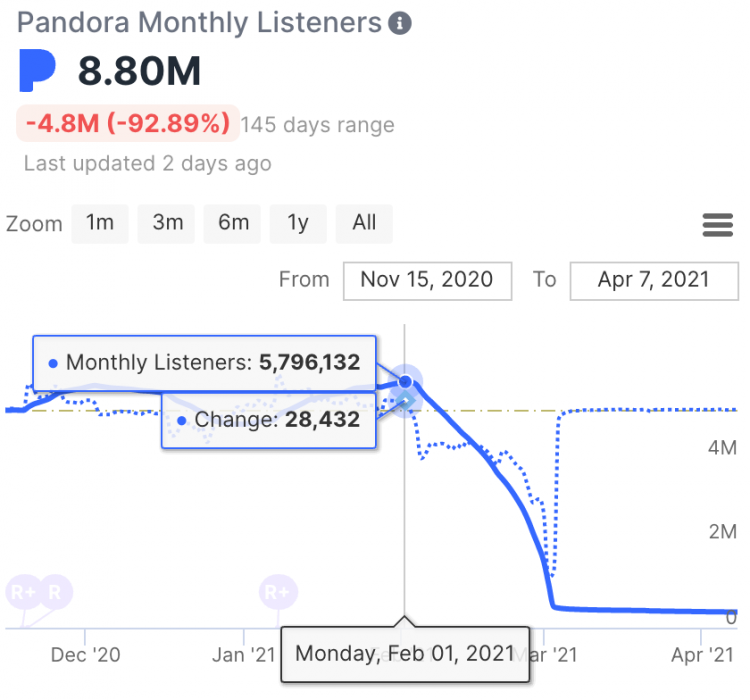 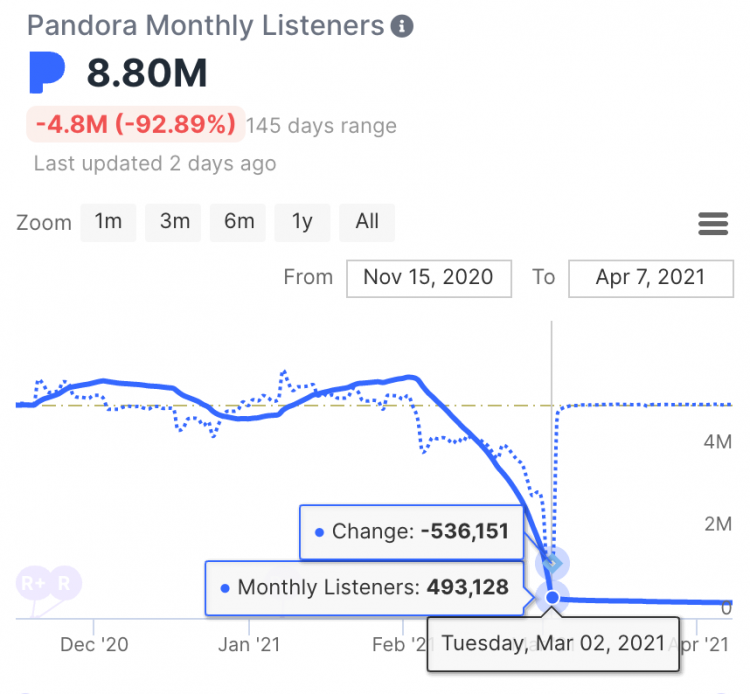 There is a clear one-month drop in Monthly Listeners for Morgan Wallen. Wallen went from 5.7 million the day before the incident (Feb 1) to bottoming out at 500K on March 2. That’s a drop of more than 5 million monthly listeners in just one month. Looking at his YouTube data in the same period, you can see a slight taper of interest in the country singer with the peak when the n-word incident occurred. 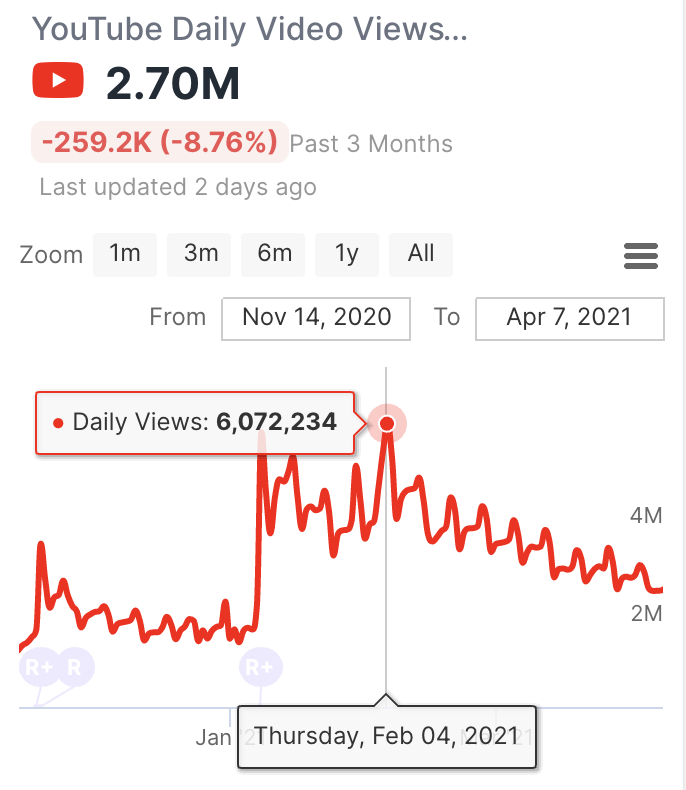 At his lowest point of interest on YouTube, Morgan Wallen went from 6 million daily views down to just under 1.8 million on September 11, around six months after the incident happened. 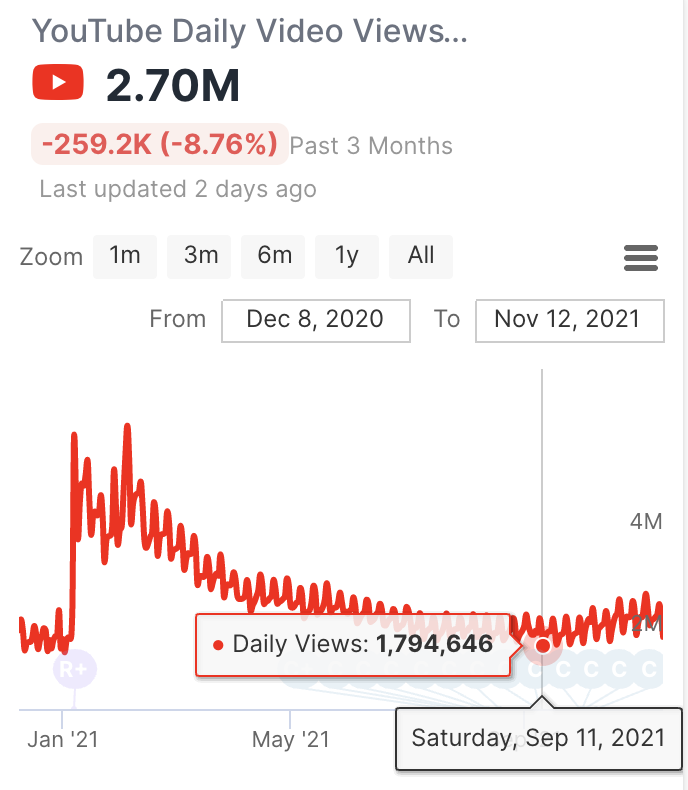 What about Spotify? Morgan Wallen also lost Monthly Listeners on the Spotify platform, peaking at 12 million and then sharply downturning for a month down to around 9.4 million.

It took nearly ten months for Wallen to begin seeing an upward trend in Monthly Listeners on the Spotify platform. Wallen’s cost of controversy came from multiple streaming platforms removing his music from their curated playlists. 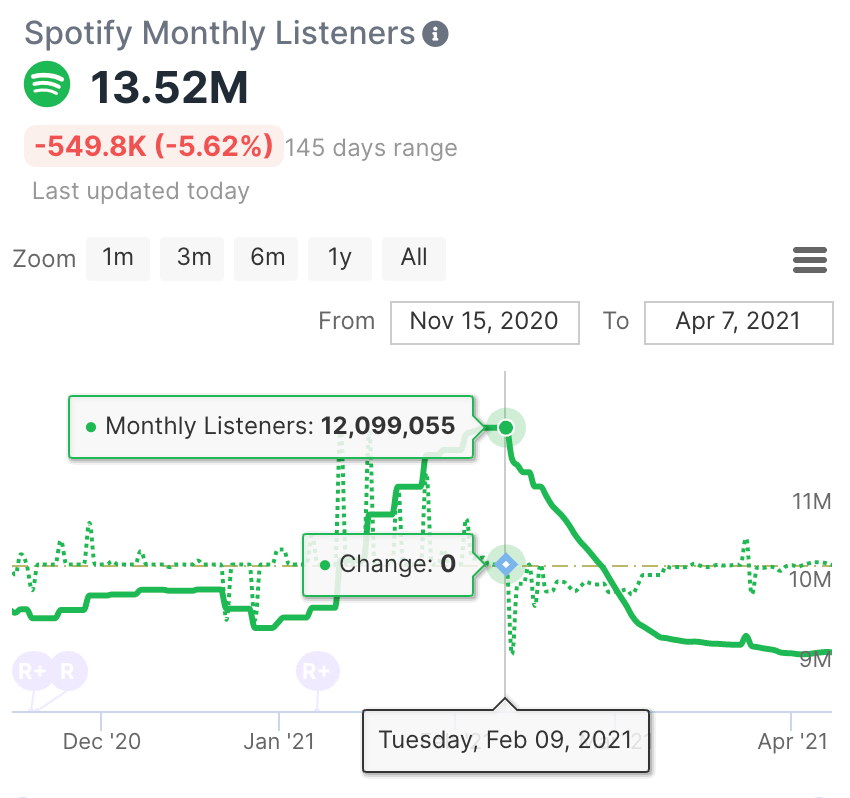 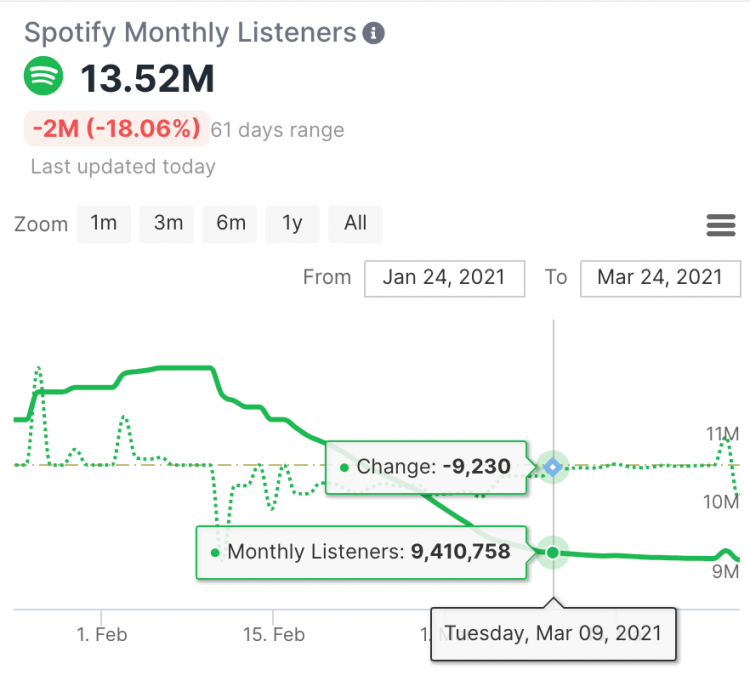 While the controversy negatively impacted Morgan Wallen’s streaming rates on Pandora, Spotify, and YouTube, social media was a different story. The day the news broke, Wallen’s Twitter following began spiking heavily. Wallen saw around 100-200 new followers on Twitter and that number continues to grow. It’s worth noting that follower accounts for major figures are rarely negative, though. 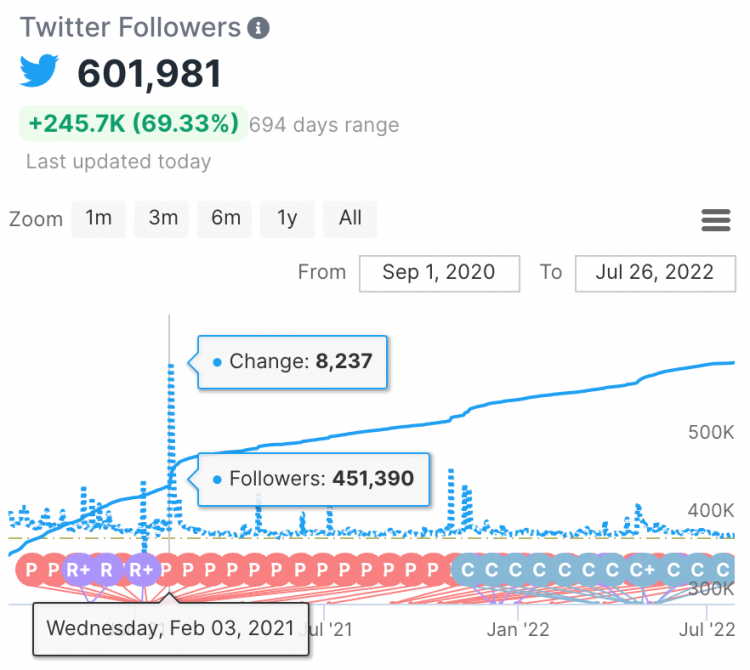 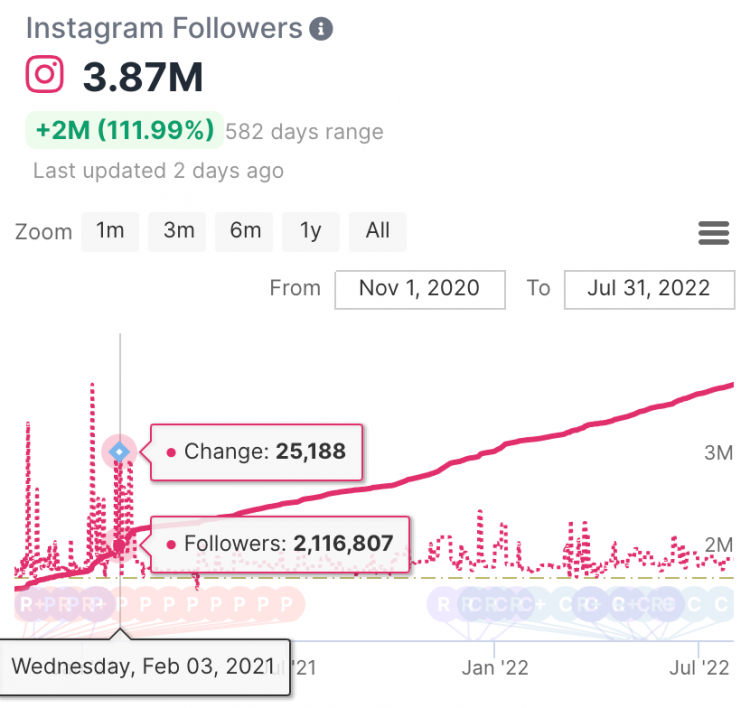 On November 5, 2021 a crowd crush event at Travis Scott’s Astroworld festival in Houston caused ten people to lose their life. After what happened at Astroworld, Scott was removed as the headliner of Coachella 2022 and other high-profile events. How did the deaths at Astroworld impact Travis Scott’s musical career based on streaming data?

Interestingly enough, Travis Scott’s Facebook follower rate turned negative after more than two months of daily growth. It continues to downtrend even to this day, but that may be because fewer young people are using Facebook than ever before. 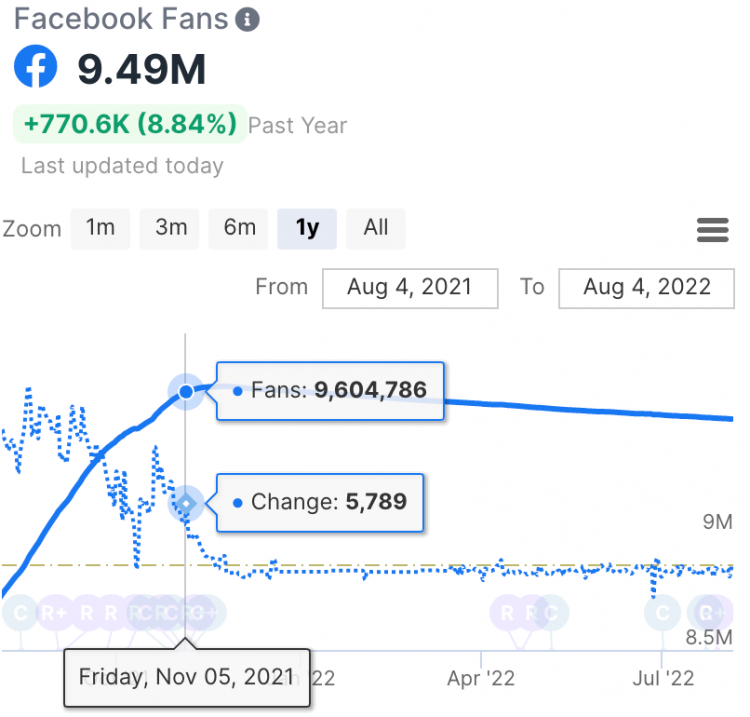 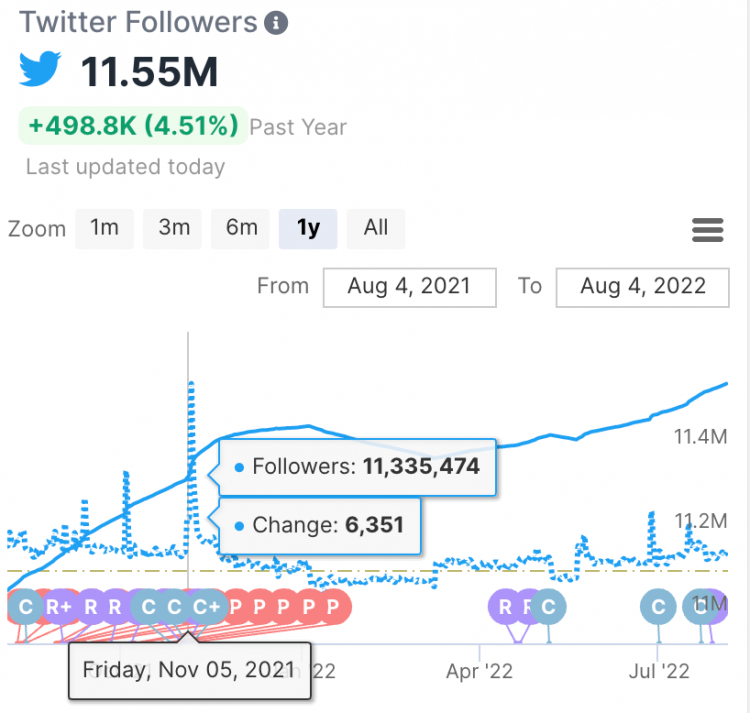 Travis Scott also took a hit on his Monthly Listeners on Spotify, which slowed down considerably following the Astroworld tragedy. On November 17, the rapper saw his first negative daily change and it continues to this day, down over nine million Monthly Listeners since the deadly festival in 2021. The cost of controversy involving the death of multiple people at concerts continues to have an adverse impact on Travis Scott’s online presence. 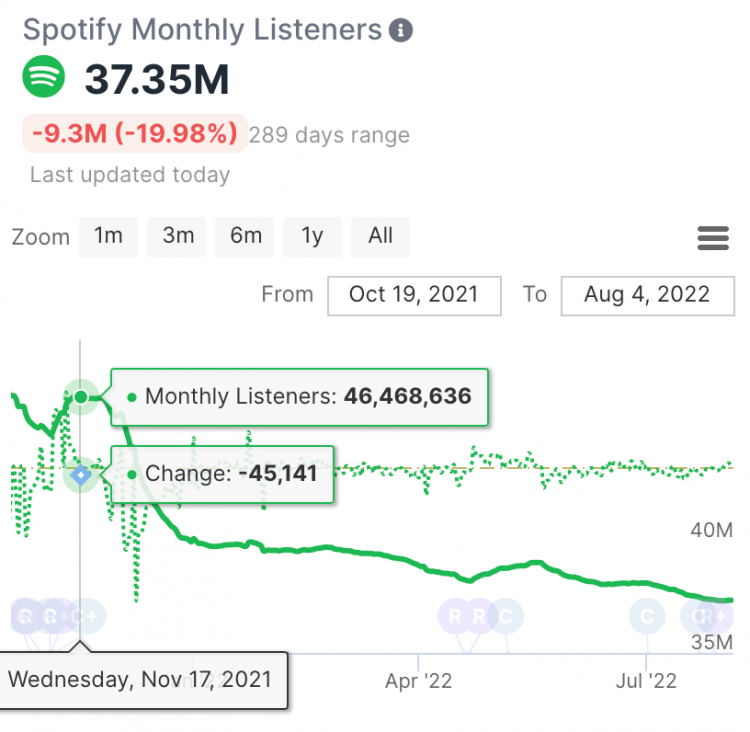 The cost of controversy for artists really depends heavily on several factors. That includes popularity at the time of the incident, the type of incident (social faux pas vs. violence & death), and whether or not platforms responded by restricting access to their music. Wikipedia is typically a reliable indicator of news activity.

Based on the artists we analyzed using Chartmetric data, there appears to be at least three patterns following the controversy.

From a damage control perspective for artists, there do appear to be signal patterns on certain platforms that can be watched for by their communications team.