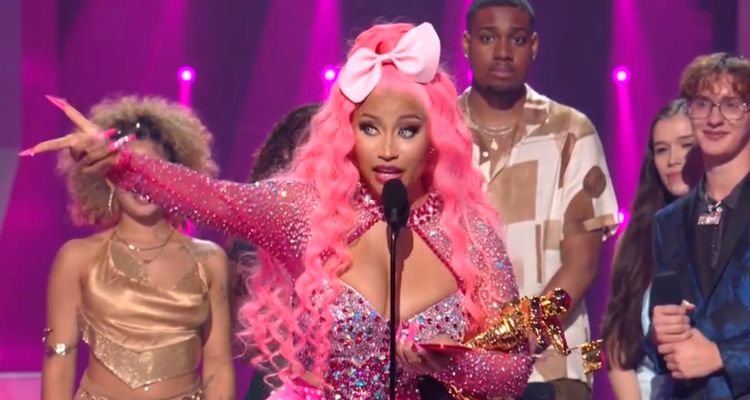 After last year’s underwhelming 3.7 million viewers across 13 networks for the simulcast of MTV’s VMAs, this year’s VMAs saw a surprising 3% increase. The highly advertiser-coveted demographic of adults 18-49 increased in viewership by 1% on Sunday compared to last year — a 2.81 viewership rating compared to 2.78. Nielsen Ratings won’t report out-of-home viewing numbers until later this week, though excluding them still shows an uptick in overall viewership.

The channels that simulcast the VMAs, like last year, included MTV, MTV2, VH1, the CW, Comedy Central, Pop, Nick At Night, TV Land, Logo, Paramount Network, BET, BET Her, and CMT. The 2022 MTV VMAs were held at the Prudential Center in New Jersey on Sunday, August 28.

Nicki Minaj, Jack Harlow, and LL Cool J hosted, while Nicki was honored with the Video Vanguard Award during the show. The event concluded with Taylor Swift’s winning video of the year, “All Too Well (10 Minute Version),” and Taylor also surprised fans with her announcement of an upcoming new album.

Other shows airing in the same timeslot that dominated the VMAs this year include Big Brother, Celebrity Family Feud, and The $100,000 Pyramid — which indicates both a rising trend for gameshows and a falling trend for award shows.

The lower ratings overall in the last few years aren’t exclusive to the VMAs — the Grammys, BET Awards, and the Billboard Music Awards have all seen a downward trend in viewership, but it isn’t just the music industry either. Public interest has waned for award shows over the last few years, even more so as cable television struggles to keep up with its streaming competitors.

Still, one new category in this year’s VMAs — Best Metaverse Performance, won by Korean girl group sensation Blackpink — indicates MTV’s willingness to try and keep up with the times. Blackpink beat out several other big names for the honor, including BTS, Travis Scott, Ariana Grande, and Justin Bieber.