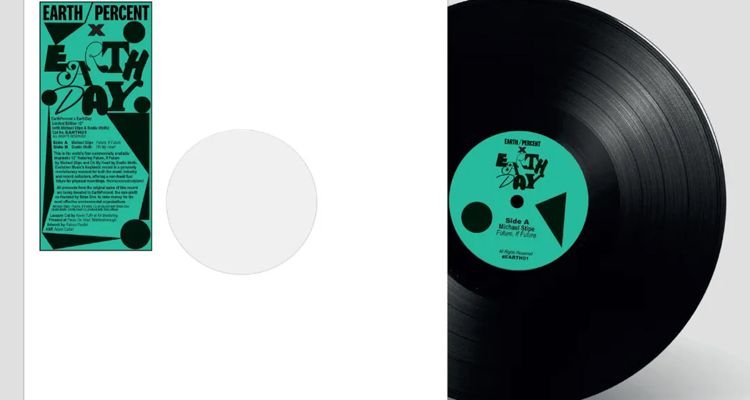 Traditional vinyl records are pressed on polyvinyl chloride (PVC) which is considered one of the most environmentally damaging plastics. It’s a highly versatile and relatively inexpensive material, but the process to create the material uses chlorine. The music industry is seeking alternatives to vinyl for a more sustainable future and bioplastic vinyl may be the answer.

Michael Stipe’s new bioplastic 12″ was part of Bandcamp Friday promotion, limited to 500 copies. The record features two tracks, including “Future if Future” and Beatie Wolfe’s “Oh My Heart” on the flip side. The release was made possible by Evolution Music.

“I’m thrilled to be working with EarthPercent and Evolution Music on this release, imagining positive innovation through action,” says Michael Stipe about the initiative. “Simply showing that this type of solution-based project is possible opens pathways to a brighter future.”

Evolution Music says the bioplastic vinyl is made from a combination of “sugars and starches.” They previously partnered with UK-based environmental group Music Declares Emergency to debut new bioplastic vinyls in that country. That special edition release was only available to people who donated to the crowdfunding campaign, while Stipe’s record was commercially available on Bandcamp Friday.

Curious to know more about Evolution Music and the bioplastic vinyl records they’re creating? NPR’s Rachel Martin spoke with the company to discuss how the company is seeking to change the impact of vinyl now that it’s experiencing a resurgence in popularity. “I want sustainable products in a 21st century environment,” Marc Carey, CEO of Evolution Music says. “So I had to form a new company and do it myself.”

Blood Records Founder Craig Evans says he couldn’t believe the sound quality from the bioplastic vinyl. “The first time I heard one of those test pressings, I couldn’t believe what I was listening to was basically made of bioplastic and plant waste.”

Vinyl sales in the United States alone topped $1 billion in 2021. That’s the first time they’ve achieved that number since the 1980s before CDs made vinyl old-fashioned. Evolution Music says once it has its bioplastic production is in full swing, these albums will cost much the same as current PVC vinyl records.