How To Record Vocals at Home (for Beginners) 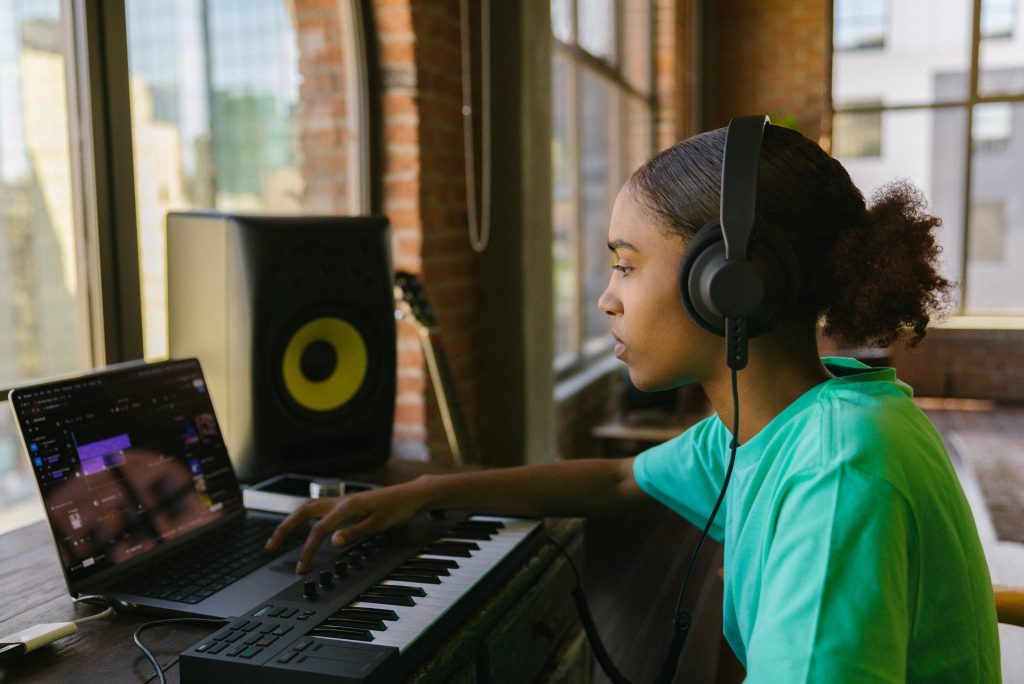 Most indie artists are recording music from their bedrooms. It’s amazing we have that opportunity, but it also requires knowing more about how to properly record. And the quality of the vocals is one of the things that can make or break a track. So here’s the basic process for how to record vocals at home…

You don’t actually need super expensive equipment and a professional vocal booth to record great sounding vocals. Yes, that would be ideal. But you can also work with what you have.

For recording vocals, you usually want a condenser microphone. These are sensitive mics that pick up a lot of detail, which is what you want in the studio.

If you’re looking for affordable dynamic mics that work well in a home studio, try the Audio-Technica AT2035 or the Rode NT1-A. Both are praised by many professional engineers.

Along with a mic, you’ll obviously need a mic stand. But you’ll also want to get a pop filter. This is a mesh filter that goes between the mic and your mouth to cut down on plosives (harsh sounds like P and T).

How To Treat Your Room

The general rule is to make your vocal recording space sound as dead as possible. That way, you limit the reverberations the mic picks up, which you cannot remove in post. This allows you to better control the sound during the mixing stage using reverb, which emulates the room sound of your choice.

Ideally, you’d have the money to invest in professional-grade acoustic panels, bass traps, and sound diffusers. But most of us don’t have that kind of budget. Honestly, you can do well with thick blankets, pillows, and even a mattress leaned against the wall. Anything to cut down on the reverb.

I often record vocals in my walk-in closet. My clothes work as absorption, I hang up a thick blanket, and I put pillows in the corners.

When recording vocals, you have to use headphones. If you use speakers, the sound will bleed into the mic. I use the Sennheiser HD280 Pros, but any closed-back headphones will do the trick.

It’s best to process the vocals after recording. Because if you add processing on the way in, which would require a preamp or other outboard gear, you cannot take those effects out of the recording. It’s best to record a raw vocal, then adjust afterward.

How To Set Up the Microphone

Once you’ve got your vocal space set up and treated as best you can, here’s how to set up the mic…

After you’ve got your mic on a stand, attach a pop filter. This is a mesh screen that goes between your mouth and the mic. It reduces plosives, which are sounds caused by air shooting out of your mouth, usually from P, T, F, and B sounds.

The main thing to pay attention to is consistency. Don’t be moving all around as you record vocals. The sound of the vocal will change and it will be noticeable.

Tips for When You’re Recording

Check for Clipping at the Loudest Note

Before you record vocals, sing the loudest part of the song into the mic while keeping an eye on the mic channel on your interface. If it goes into the orange or red (called “clipping”), turn down the gain on the interface. Because if you record a vocal that clips, you cannot remove that artifact. It’s better to record a quieter vocal and boost it in post than to record a vocal that clips.

Don’t Move Around Too Much

Like I mentioned above, the proximity effect can work to your advantage. You just have to choose a distance from the mic and stay there. If you move around while recording vocals, it will be noticeable, and you can’t really do anything during editing to fix it. Find your spot, plant your feet, then focus on your singing.

Do One More Take

If you’re debating doing another vocal take, just do it. It’s better to have more takes than you need. It gives you options in the editing stage.

For example, Paul McCartney recorded 32 takes of The Beatles’ “Blackbird.” And the last take was the one that made the final cut.

Comp the Lead Vocal Before Harmonies

It’s tempting to record all of the vocals at one time, the lead and the harmonies. You already have your recording space and mic and gain level set up, so it seems easier to just record the background vocals right then and there.

But just wait. You have to comp the lead vocal first. “Comping” a lead vocal means you go through and choose the best takes for each section and phrase. And the harmonies have to match the lead vocal almost perfectly, so you need to have decided on the final lead vocal beforehand.

The last tip for recording vocals is this: emotion is often more important than hitting every note exactly right. Yes, you have to sing in tune. But sometimes a performance infused with raw emotion is better than a technically perfect performance.