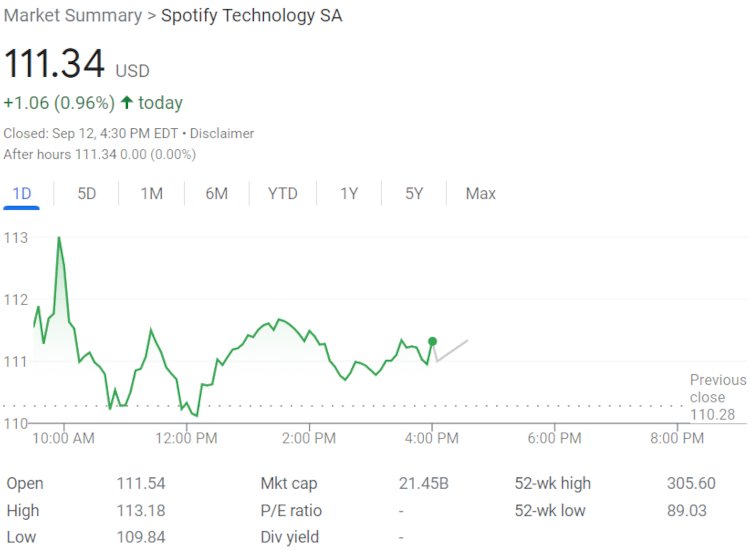 Spotify stock (NYSE: SPOT) has rallied by about seven percent during the last five trading days but remains approximately 54 percent beneath the per-share price that it boasted at 2022’s beginning. Now, as execs are forecasting podcasting profitability within the next two years, financial professionals and investors are discussing SPOT’s path forward.

During today’s trading hours, Spotify stock finished at $111.34 per share, representing an almost one percent improvement from Friday’s close as well as the initially noted seven percent gain across the latter five working days.

But with SPOT hovering far beneath its 2022 high, the record price of nearly $400 that it touched towards 2021’s start, and even its value at the time of Spotify’s 2018 IPO, some analysts are expressing the belief that the streaming giant is well-suited for long-term investments.

One such individual, Evercore senior managing director and head of internet research Mark Mahaney, touted SPOT’s perceived value in a recent Closing Bell interview. Spotify CFO Paul Vogel last week participated in a half-hour discussion at Evercore’s tech conference, during which he indicated that podcasting would become profitable for his company throughout the next 12 to 24 months.

“Spotify, I think, is an inflection-point story. I know that I said that a year ago, Sara, and it didn’t happen. … But going into ’23, I think you get gross margin expansion for the first time ever for this name, for a variety of different reasons,” Mahaney relayed of Spotify, which CEO Daniel Ek believes will generate $100 billion annually within the coming decade. “I think they’re finally reaching scale, I think they’re starting to get a lot of advertising revenue from artists and labels – that really helps.

“And then they’re finally moving off the heavy investment phase that they’ve been putting into podcasting. All of that comes together I think starting next year with gross margin expansion. And then they’ve had this user acceleration this year that I think can convert into paid-sub acceleration next year or strong growth next year. I think you want to be long Spotify before that happens, and that’s now,” continued Mahaney.

Ark Invest founder and CEO Cathie Wood, whose ETFs offloaded more than $26 million worth of Spotify stock in April alone, late last week cashed out of another 20,000 SPOT shares via an ETF, according to reports.

Of course, time will reveal the performance of Spotify stock and the company itself, which through 2022’s initial eight and one-half months has diversified into ticketing, audiobooks (testing will begin “very soon,” per CFO Paul Vogel), non-fungible tokens (NFTs), the metaverse, real-time DJ sets, and more.