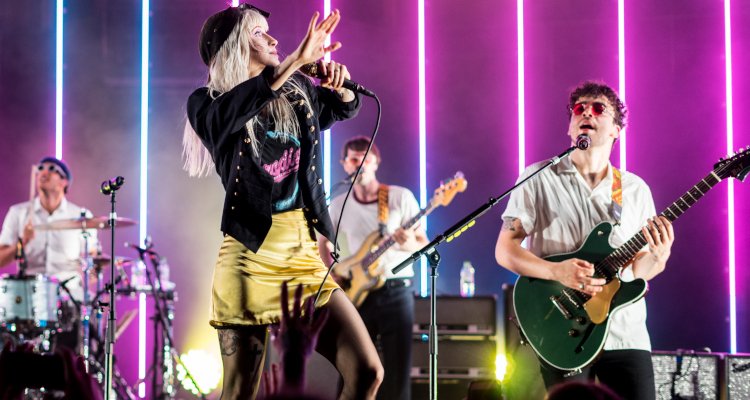 Ahead of a quick-approaching comeback tour – and following ticketing disasters involving high-profile acts like Bruce Springsteen – Paramore has turned to Ticketmaster’s “Face Value Ticket Exchange” in an effort to prevent ultra-expensive resales.

Paramore is booked to kick off a fall concert series with an October 2nd performance in Bakersfield, California. Then, the Franklin, Tennessee-based act will make stops in states including Nebraska, Utah, Texas, Oklahoma, Ohio, and Florida, besides entertaining fans in Toronto and Mexico City, according to the current schedule.

But as Paramore has made clear on social media (and as several diehard fans have lamented in posts of their own), those interested in attending either of the Los Angeles performances must obtain mobile-only passes through the “Ticket Request Program” or the “Face Value Ticket Exchange.”

In brief, the former required prospective buyers to select their ticket information (quantity, date, etc.) and enter their payment specifics by September 14th’s end. Subsequently, the applicants who were selected by the company – needless to say, individuals who didn’t make the cut are rather irritated with the system – were automatically charged for the passes.

Meanwhile, the sole way for these early buyers to offload the tickets (and the sole way for would-be attendees to secure tickets after failing to do so under the Request Program) is via the aforesaid “Face Value Ticket Exchange.”

“We are working with Ticketmaster to ensure tickets end up in the hands of our fans at face value,” Paramore wrote of the matter. “LA tickets are only eligible to be purchased and resold through Ticketmaster’s Face Value Ticket Exchange.

“The Face Value Exchange will allow fans to offer their tickets for resale at face value exclusively through Ticketmaster and will not be eligible to resell on third-party sites for profit,” the band proceeded, encouraging fans to visit Ticketmaster itself for additional information.

“Paramore has partnered with Ticketmaster to make sure fans get their tickets at face value. To achieve this, tickets will be restricted from transfer – restricting ticket transfer will help to prevent the unwanted resale of any tickets at above face value prices,” the Live Nation subsidiary’s website elaborates.

“On the night of the show, all guests will be required to enter together with the original ticket purchaser. If a fan is unable to attend the event after purchasing tickets, Paramore and Ticketmaster will be offering a fan to fan Face Value Exchange program to allow for resale of tickets at the original Face Value price.”

Predictably, this program centers on transferring tickets from one Ticketmaster account to another for their original sale price – “the ONLY way a ticket can be moved to a different Ticketmaster account once purchased” – though state law is said to prohibit the band from employing the model in New York and elsewhere.

“We really wanted to use the same program for this show,” Paramore penned, “but unfortunately, New York state law does not allow for the restriction of ticket resale pricing. However, the new law does require resellers to disclose what they originally paid for the ticket alongside their asking price.

“We heard your feedback and plan to implement the Ticket Exchange Program moving forward whenever possible, but every show’s ability to participate will rely on their respective state laws. With that said, we’re still doing our best to get NYC tickets in the hands of our fans by using Ticketmaster’s Verified Fan platform.”