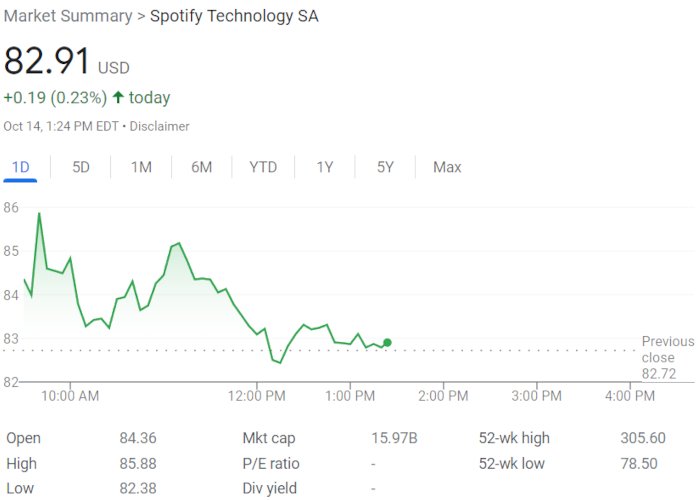 Spotify stock (NYSE: SPOT) dipped to a record low of $78.50 per share following news of TikTok parent ByteDance’s plans to spearhead a global streaming service expansion. Shares have since rebounded past the $80 mark, however, and some remain optimistic about SPOT’s long-term trajectory.

At the time of this piece’s writing, Spotify stock was trading for $82.91 per share, representing a small improvement from yesterday’s close as well as a nearly 19 percent decline across the past month. But as mentioned, SPOT fell to a record low of $78.50 during early trading yesterday, when word of ByteDance’s apparent streaming-service ambitions began making rounds.

The Beijing-headquartered company, which already operates a streaming service called Resso in Indonesia, India, and Brazil, is reportedly discussing the possibility of making a music platform available to fans around the globe.

Talks are ongoing, and a potential agreement is relatively far off, according to reports, which have likewise noted that ByteDance broached the idea of integrating a full-fledged streaming option into TikTok itself.

Notwithstanding the early nature of these conversations and the lack of a concrete deal, though, the prospect of ByteDance rolling out a stateside streaming offering – and competing with the likes of Spotify and Apple Music – was evidently enough to prompt certain shareholders to sell.

For further reference, Spotify wasn’t the only streaming service that experienced a stock-price tumble amid headlines pertaining to ByteDance’s streaming plans. Once again at the time of writing, Tencent Music stock (NYSE: TME) was down about two percent at $3.86 per share, against a separate two percent decrease for Anghami stock (NASDAQ: ANGH) and its $2.42-per-share price.

Needless to say, ByteDance (which filed a U.S. trademark application for “TikTok Music” months back) doesn’t currently pose an active threat to the well-entrenched Spotify, which boasted 433 million monthly active users, including 188 million subscribers, as of Q2 2022. (The Stockholm-based business’s Q3 2022 earnings report will become available on Tuesday, October 25th.)

In the long term, it’ll be worth following the impact of the rumored TikTok Music service. It’s hardly a secret that the controversial TikTok proper has a massive userbase and has catapulted a number of songs (and acts) into the commercial spotlight. Fueled by ultra-enthusiastic fans, this momentum will presumably drive results should ByteDance actually expand into streaming in the States and elsewhere.

On the other side of the coin, Spotify, Apple Music, and Amazon Music already hold key advantages in terms of their respective user totals, song libraries, exclusive music content, and non-music audio entertainment. The initially noted investors who are long Spotify have touted the platform’s perceived monetization potential regarding controversial advertising options, podcasts, audiobooks, social audio, and more.