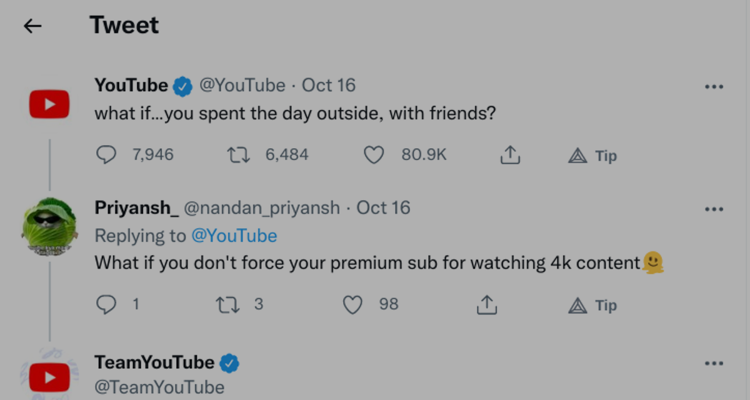 4K content on YouTube has been around for more than a decade, so those who enjoy it were bitter about the removal. Several people took to social media to complain about being unable to select the 4K video option for non-Premium subscribers. The experiment takes away YouTube functionality behind a paywall instead of adding anything new to the YouTube Premium experience.

“We’ve fully turned off this experiment. Viewers should no be able to access 4K quality resolutions without Premium membership. We’re here if you have other Qs,” the official YouTube account replied to the person. The sentiment on social media seems to be that YouTube Premium isn’t worth it for the benefits YouTube provides.

“With many content creators having issues with getting their content demonetized, age-restricted, copyright striked without any valid reasons, I have no intention to get YouTube Premium,” reads one comment on the 4K Premium-Only subscriptions. “It’s the carrot or the stick and now they’re only giving the stick.”

Google is looking to break the stranglehold that ad blockers have on its ability to serve ads on YouTube and its suite of tools, too. Changes in Google Chrome will prevent most ad blockers from working as efficiently as they do now.

YouTube is also testing upwards of ten unskippable ads in a row on its videos before a video begins. Other posts on Reddit reveal more advertising breaks with up to 10 consecutive non-skippable advertisements before the video resumes.