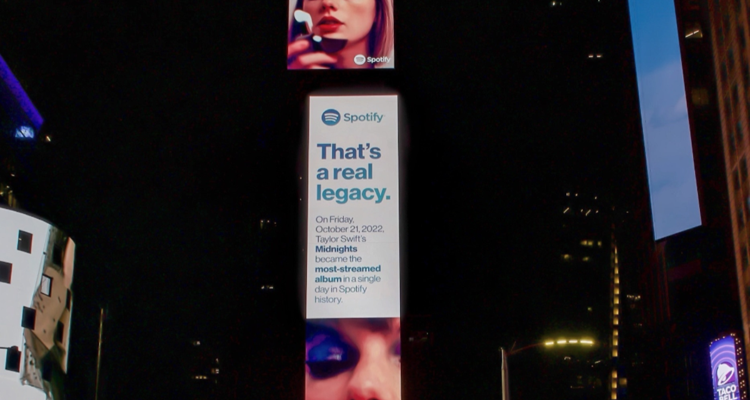 On October 21, 2022, Taylor Swift’s Midnights became Spotify’s most-streamed album in a single day. She also broke the record for the most-streamed artist in a single day in Spotify history. Spotify isn’t sharing numbers here, but Tay-Tay is once again the queen of music streaming–for now. The crown is always fleeting.

To celebrate the release of Midnights, Swift teamed up with Spotify to reveal lyrics from the album on different billboards across the world. On October 17, the first billboards were revealed in New York City and London–at midnight in each respective city.

Taylor Swift’s last release Red (Taylor’s Version) broke the Spotify record for the most-streamed album in a day by a female artist.

That release generated more than 90 million streams and broke her previous record for the release of folklore. The record for the most-streamed female artist in a day in Spotify history was 122.9 million streams. Taylor Swift ended 2021 as the most-streamed female artist on Spotify–a feat she could conceivably achieve again in 2022.

“This is a collection of music written in the middle of the night, a journey through terrors and sweet dreams. The floors we pace and the demons we face. For all of us who have tossed and turned and decided to keep the lanterns lit and go searching–hoping that just maybe, when the clock strikes twelve… we’ll meet ourselves,” Swift writes about the album on Instagram.

“Midnights, the stories of 13 sleepless nights scattered throughout my life will be out October 21. Meet me at midnight,” the artist wrote.