Spotify Stock (SPOT) Threatens to Sink Below $70 Per Share for the First Time — Will a Price Increase Turn Things Around? 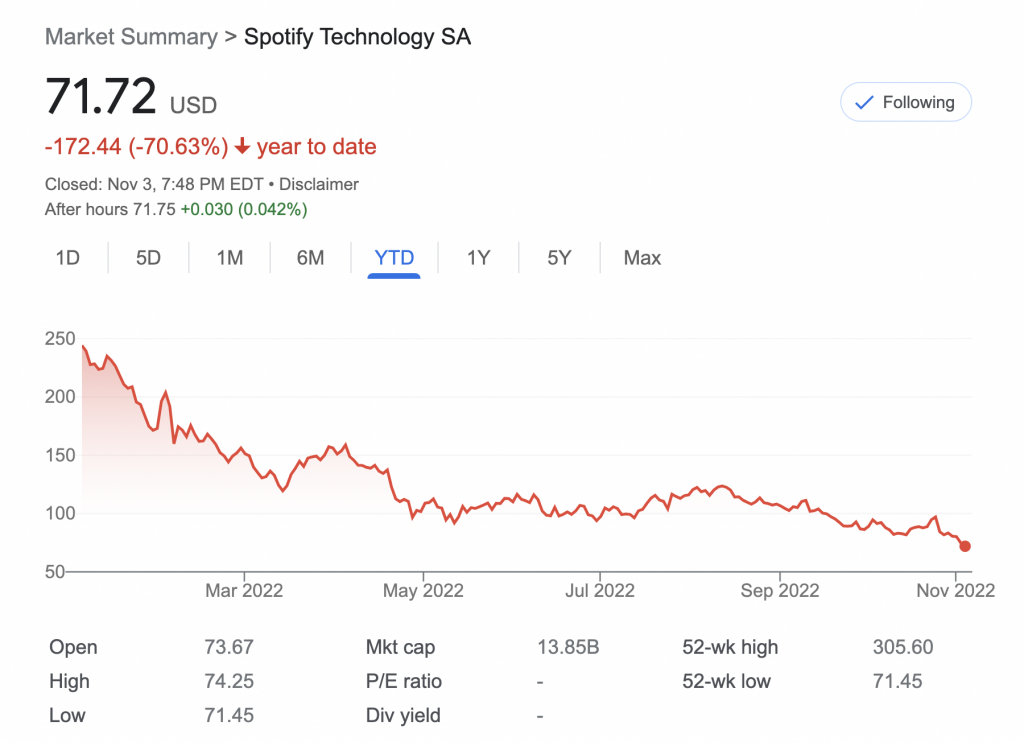 Spotify stock (SPOT) is down more than 70% YTD as of November 3rd.

Spotify stock (NYSE: SPOT) is threatening to fall beneath $70 per share for the first time in company history – prompting investors and observers to speculate about the Stockholm-based business’s path forward and long-term outlook.

During today’s trading hours, Spotify stock dipped to an all-time low of $71.45 per share, and the figure reflects a more than 24 percent valuation decrease across the past month as well as a nearly 71 percent falloff since 2022’s beginning.

While this has been yet another difficult week for Wall Street, complete with downward-trending prices for a number of stocks, evidence suggests that SPOT is particularly vulnerable to less-than-ideal developments throughout the broader market.

To be sure, SPOT’s current price likewise marks a close to 76 percent decline from early November of 2021 and is far beneath the roughly $150 apiece that shares were worth at the time of Spotify’s 2018 IPO. The points are especially significant because it was only months ago that well-known financial professionals were setting SPOT target prices above the $200 mark.

And notwithstanding the continued subscriber and revenue growth that Spotify reported for 2022’s third quarter, multiple investors have sold off their interests in the company.

On the former front, Spotify disclosed last week that it boasted 195 million premium subscribers as of September 30th, representing a 13 percent year-over-year (YoY) improvement and four percent growth on a quarterly basis.

In one prominent example of the aforesaid selloffs, though, ARK Investment Management has cashed out of millions in Spotify stock in 2022 – even as funds including Rowan Street Capital have reiterated their ambitious visions for Spotify as something of a one-stop destination for audio entertainment in the approaching years.

Time will tell whether said visions come to fruition; Spotify’s audiobook rollout has faced some obstacles, and CFO Paul Vogel is banking on podcasts’ becoming profitable during the next one to two years.

Shorter term, CEO Daniel Ek has signaled that Spotify will likely raise the price of plans – including the individual tier in the U.S. – towards 2023’s beginning. Apple Music and Deezer (but not Amazon Music) have already done so, and the long-anticipated move will presumably drive revenue growth for Spotify, which has publicly touted its goal of pulling down $100 billion annually in the next decade.