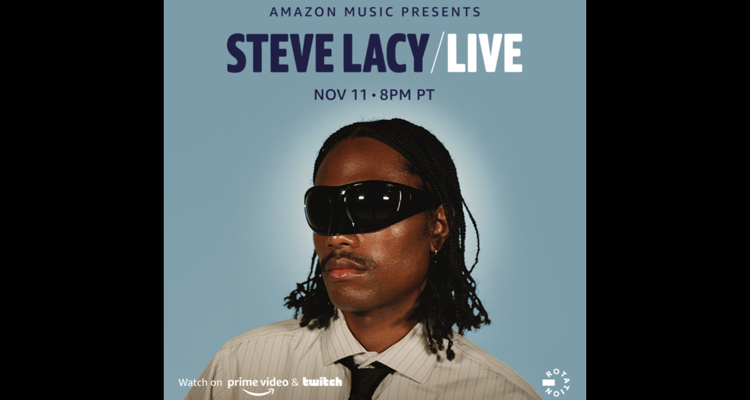 Amazon Music and Prime Video announced they will exclusively stream Steve Lacy’s sold-out November 11 show in his hometown of Los Angeles. The livestream will capture the last evening of his acclaimed Give You the World Tour in support of his 2022 album, Gemini Rights.

Tickets for the show sold out in record time, so the stream will be the only opportunity for many fans to catch the concert worldwide. Ahead of the finale show on November 11, Lacy will be the musical guest on Saturday Night Live on November 5.

“I’ve had the privilege of knowing Steve since he was still a kid in high school,” says Tim Hinshaw, head of R&B and hip-hop for Amazon Music. “He’s always been special and it’s inspiring to see how far his talent, hard work, and dedication have brought him.”

Fousheé is featured on Lacy’s track “Sunshine” (which she also co-wrote) and will be opening the show with a performance that will be livestreamed as well. Her new album, softCORE, is set to release on November 18.

The first single from the album, “supernova,” is already making waves with its genre-bending sounds. Fousheé also co-wrote Lacy’s “Bad Habit,” which was the number one track on the Billboard Hot 100 for multiple weeks and has gone platinum since its release in June.

The Give You the World Tour has traveled North America, leaving fans enraptured — a recent Silver Spring, Maryland show at The Fillmore had The Washington Post raving:

“Lacy looked cool and comfortable in the spotlight, with braids and wraparound shades that connected the stylistic dots back to Stevie Wonder, another prodigy who penned songs that were keyed into young life.”