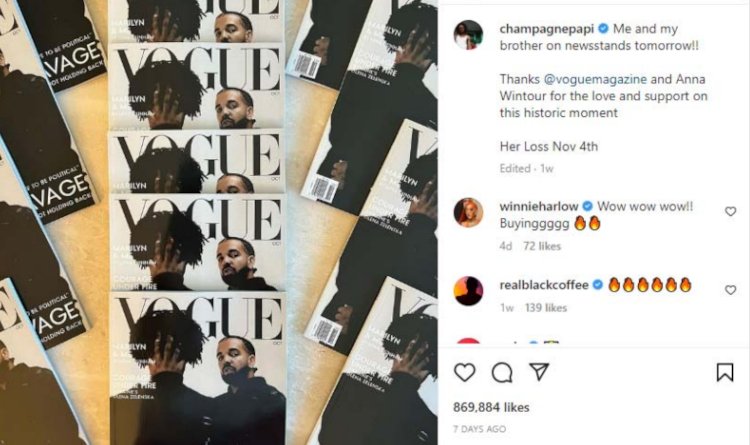 A screenshot of an Instagram post showing the Vogue issue at the center of Condé Nast’s lawsuit against Drake and 21 Savage. Photo Credit: Digital Music News

Condé Nast is officially suing Drake and 21 Savage for allegedly using a fake Vogue issue to promote their recently released Her Loss album.

Ahead of the release of Her Loss, which Drake and 21 Savage jointly dropped last Friday, the artists worked to promote the project with clips from a fake Howard Stern interview, footage of a Tiny Desk concert that didn’t actually happen, and, of course, the Vogue issue at the center of the complaint.

SiriusXM’s Stern seems amused with the depiction of his program and the broader premise of manufacturing a PR campaign, and NPR, upon clarifying that the duo behind Her Loss hadn’t in fact played a Tiny Desk show, emphasized that 21 Savage and Drake are “welcome anytime.”

But needless to say, given the newly filed lawsuit, Condé Nast isn’t quite so thrilled about the allegedly “counterfeit” Vogue edition, which it maintains has been used as part of a “deceptive campaign.”

Beyond the ample interactions that the magazine cover has racked up on social media, Condé Nast claims that the fake Vogue issue has appeared on billboards and in magazine stands in major cities including Los Angeles, New York, and Drake’s hometown of Toronto. (Profit-minded fans are selling copies of the magazine for sizable sums on Ebay at present.)

“Vogue magazine and its Editor-in-Chief Anna Wintour have had no involvement in Her Loss or its promotion, and have not endorsed it in any way,” the firmly worded legal text reads. “Nor did Condé Nast authorize, much less support, the creation and widespread dissemination of a counterfeit issue of Vogue, or a counterfeit version of perhaps one of the most carefully curated covers in all of the publication business in service of promoting Defendants’ new album.”

And after rather confidently claiming that the Drake and 21 Savage magazine promo “underscores the tremendous value that a cover feature in Vogue magazine carries,” the suit dives into the “unmistakable” confusion allegedly brought about (in the media as well as on social platforms) by the marketing initiative.

“Since as early as October 31,” the plaintiff and its legal team have communicated with Drake, 21 Savage, and Hiltzik Strategies “repeatedly to demand that they cease their infringing activities and take appropriate remedial measures to curtail further public confusion,” according to the action.

On the relief front, Condé Nast is seeking (among other things) an order barring the use of the artists’ Vogue issue and related promotional materials as well as up to $4 million in statutory damages or, alternatively, treble the defendants’ profits from the sale of the album and the magazine in which they appeared.

The post featuring the Vogue cover in question was removed from Drake’s Instagram account during this piece’s writing, but the 36-year-old doesn’t appear to have publicly addressed the courtroom confrontation. In September, Drake and LeBron James were named in a $10 million suit concerning the rights behind their Black Ice documentary.