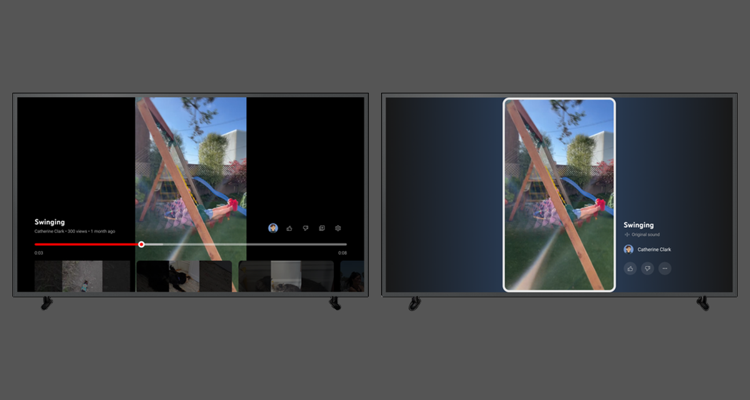 YouTube is bringing its YouTube Shorts format to TV with a new look designed to improve how the vertical videos look on widescreens.

Neal Mohan, YouTube’s Chief Product Officer, says the company has put a lot of work into redesigning how the format appears on TV. “Our research told us that there would be unique perks of watching Shorts on the big screen,” reads the official blog post announcing the change. The customized YouTube Shorts experience now focuses on the video, with creator information to the right.

“We also learned that viewers wanted to be in the driver’s seat of the viewing experience and were happy to use the remote to manually advance to the next Short rather than have the feed autoplay,” adds YouTube. That’s markedly different from how most short-form video apps work with a ‘Discovery Feed.’ TikTok, YouTube Shorts, and Instagram Reels offer an autoplay video queue designed to keep the viewer tuned in with very little interaction needed.

YouTube’s final design for its YouTube Shorts on TV includes a vertical video on a color-sampled background. There is video information on the right side of the screen for viewers to see the channel and other interactive features.

YouTube says it looks forward to bringing additional functionality to the TV view for YouTube Shorts. The new view is rolling out to TV models in 2019 and later and on all newer gaming consoles (Xbox Series X|S, PlayStation 4|5).

YouTube Shorts are growing in popularity, so it makes sense to target where people watch videos. According to data from October 2022, YouTube Shorts has 1.5 billion monthly active users and has accumulated over five trillion views so far. The platform is also growing as US creators who are tired of TikTok’s meager revenues migrate to YouTube Shorts.

The new plan gives YouTube creators a 65/45% split in favor of the creator. The only rub is that money is pooled and then distributed to creators based on the share of total Shorts views for the month. Creators must have at least 1,000 subscribers and 10 million views in 90 days to qualify for the new revenue share program launching in early 2023.