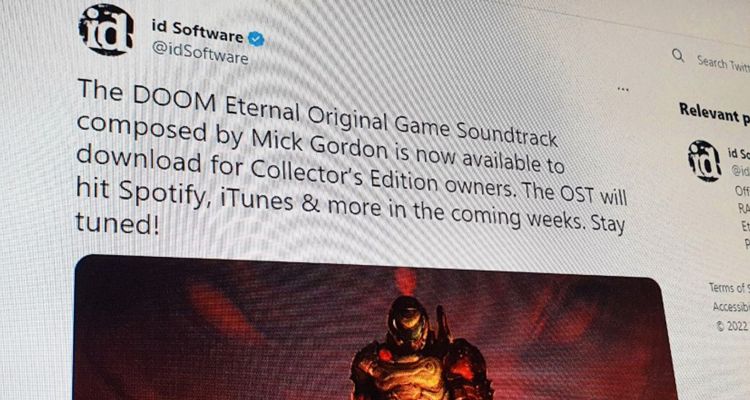 Two years ago, the Doom Eternal OST was released to universal negativity among the gaming community. Now composer Mick Gordon is speaking out.

The composer posted a lengthy piece on Medium this morning that details his side of the story. Some of the allegations mentioned in the post include failing to pay him for half the game’s soundtrack, improper music crediting, and a generally abrasive culture at id Software with one of its executive producers.

Following the release of the Doom Eternal soundtrack in 2020, executive producer Marty Stratton took to Reddit to issue a statement about the quality of the soundtrack. Stratton says he was concerned the soundtrack wouldn’t be able to be delivered in time. Now Mick Gordon paints a picture of why that may be.

Gordon says he was originally hired to write the in-game score for Doom Eternal. The game’s score is written for an interactive music system that can dynamically piece short audio files together in response to a player’s actions. It’s entirely different from the Doom Eternal OST in question.

In-game scores are budgeted in minutes. Lead developers calculate the expected length of an in-game score at the beginning of a project and negotiate a per-minute rate with a composer–written into the game’s music contract. Gordon says he was contracted to write 142 minutes of music for Doom Eternal’s score.

On June 6, 2019, id Software announced a special collector’s edition of Doom Eternal to include an ‘official soundtrack,’ up for pre-order immediately. At that time, Gordon says the OST wasn’t in production and he hadn’t been offered a contract to produce it. “I learned about it in the media,” Gordon writes on Medium.

The collector’s edition was sold for hundreds of dollars and was advertised to gamers as including a copy of ‘Mick Gordon’s original Doom Eternal soundtrack.’ Gordon alleges that by October 2019 he hadn’t received any materials he needed to finish the score and still hadn’t been paid since January 2019 while id Software refused to talk about the OST at all. Doom Eternal was eventually delayed to March 20, 2020, because the game was not ready to launch. Gordon says he was finally paid for his work on the in-game score in November 2019.

Gordon alleges that id Software went on to use double the minutes it was contracted to inside the game.

“The beginning of 2020 marked six months of pre-order sales without an OST deal,” Gordon says. “My sustained demands for a contract had become an arduous exercise in expressing myself to deaf ears.” Gordon says he went over executive producer Marty Stratton’s head to Bethesda (the game’s publisher) directly.

“Bethesda quickly responded – they were grateful to make contact and told me they would love to talk about the OST,” Gordon notes. He also notes that no one from id Software was included in those talks. “That continued to be the case over the following weeks–I discussed the specifics of the OST project and negotiated the deal directly with Bethesda without any involvement from Marty Stratton or id Software.”

Gordon says he wanted to deliver a 30+ track OST, but instead Bethesda asked him to produce 12 songs. On March 7–two weeks before the game would release–Bethesda sent Gordon the terms for the Doom Eternal OST.

On March 11, Bethesda publicly announced the soundtrack wouldn’t be available on time. Zenimax (Bethesda’s parent company) sent Gordon the contract for the OST on March 18–48 hours before the Doom Eternal release.

The game’s executive producer allegedly had the game’s lead audio designer working on a separate OST for the game for at least six months that cut together songs using edited chunks of the in-game score. Metadata from the files reveals that work on this alternative OST began in August 2019–six months before Gordon received a contract for an original soundtrack already marketed featuring his name.

Gordon confirms he was paid the total contract amount, including the on-time bonus payment he was offered. But the final version of the Doom Eternal OST were withheld, and he wasn’t allowed to hear it before release. “Alongside my direct contributions were an additional 47 tracks made by poorly editing together bits and pieces taken from my in-game score,” Gordon says.