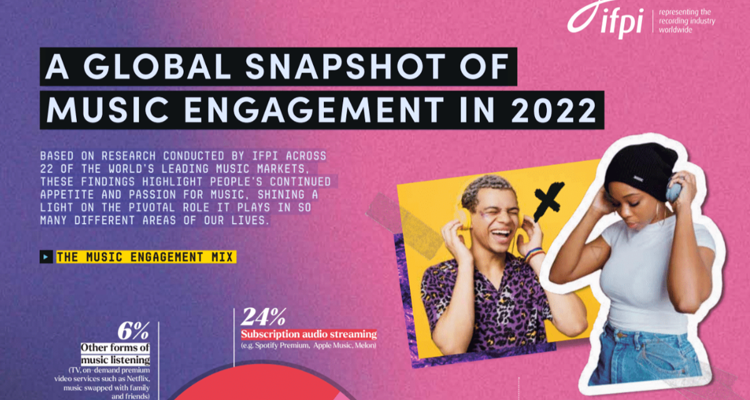 The IFPI has released its ‘Engaging with Music’ report for 2022, revealing how people are consuming music.

The report is based on the responses of more than 44,000 people across 22 countries and is the largest music study of its kind. The study was carried out among a demographically representative sample of the online population aged 16-64 in the following territories: Argentina, Australia, Brazil, Canada, France, Germany, Italy, Japan, Mexico, Netherlands, New Zealand, Poland, South Africa, South Korea, Spain, Sweden, UK and USA. The study was also conducted amongst 16–44-year-olds in China, India, Indonesia, and Nigeria.

More than 45% of music fans choose paid subscription services as their primary way to listen to music. 69% of people say that listening to music is important to their mental health and exercise routine. Another notable shift in the way people are consuming music is how they are engaging with it.

On average, people across the globe use six different methods to engage with music including video and audio streaming, terrestrial radio, television, film, gaming, and creating short-form videos using music. Around 63% of all time spent on short-form video apps are on videos where music plays a central role in the video. Radio remains a popular way to access music, with 73% of respondents saying they listen primarily to the radio for their music consumption.

Finally, unauthorized access to unlicensed music continues, with one in three respondents saying they use these methods to listen to music.

“This year’s Engaging with Music report paints a fascinating picture of how fans around the globe listen and engage with music today,” says Frances Moore, CEO of IFPI. “It shows the results of record companies’ partnership with artists and their work to harness new technologies to connect fans with their favorite tracks in even more ways.”

“We continue our work to ensure that those seeking to profit from unlicensed and unauthorized music can’t threaten the vibrancy of a music ecosystem that is essential to artists and fans,” Moore continues.