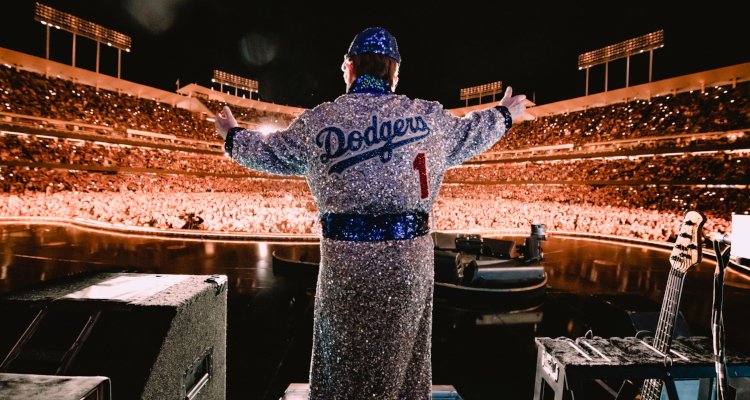 But only the latter of the happenings was shown to fans on Disney’s streaming platform, which dubbed the three-hour occurrence “Elton John Live: Farewell from Dodger Stadium.” Besides a multitude of supporters, artists including Paul McCartney, Mick Jagger, and H.E.R. were on hand for the performance, as were actors Neil Patrick Harris, Christopher Lloyd, Connie Britton, Kirsten Dunst, John Stamos, and Raven-Symoné, to name just some.

Additionally, 75-year-old Elton John – who’s scheduled to kick off a 10-date Oceania tour leg in January – welcomed Dua Lipa, Kiki Dee, and Brandi Carlile to the stage for duets during the multifaceted North American finale. Lipa joined John in performing “Cold Heart,” Dee contributed to a rendition of her and John’s 1976 hit “Don’t Go Breaking My Heart,” and Carlile sang “Don’t Let the Sun Go Down on Me.”

After the aforesaid Oceania leg concludes, the Regimental Sgt. Zippo artist is expected to hold 50 more concerts in Europe between March and July of 2023, including stops in the U.K., Ireland, Spain, Belgium, France, Switzerland, Germany, Denmark, and Sweden.

The formal release that Disney+ sent out to commemorate the livestream doesn’t identify the number of viewers that tuned in for the concert event.

If the multitude of enthusiastic social media messages penned by Elton John diehards are any indication, however, many enjoyed the show from the comfort of home. And Disney+ has already made the replay available to stream and started promoting the hours-long event with YouTube clips.

As mentioned at the outset, Disney+ is hardly alone in streaming traditional live music events to fans around the globe. TikTok is preparing to stream Wet Leg’s sold-out performance this Thursday, whereas SiriusXM 10 days ago afforded viewers a front-row digital seat to Drake’s show at the Apollo Theater (which has a capacity of about 1,500).

Lastly, several festivals are now broadcasting through platforms such as Amazon and Hulu. (Separately, Lil Wayne followed last week’s Thursday Night Football with a set on Amazon Music Live.) And adjacent to these real-time looks at in-person gigs, Apple Music to this point in 2022 has welcomed multiple artists into the studio to record “exclusive live releases.”