You Wouldn’t Want to Miss Elton John’s Last Show Ever… Or Would You? 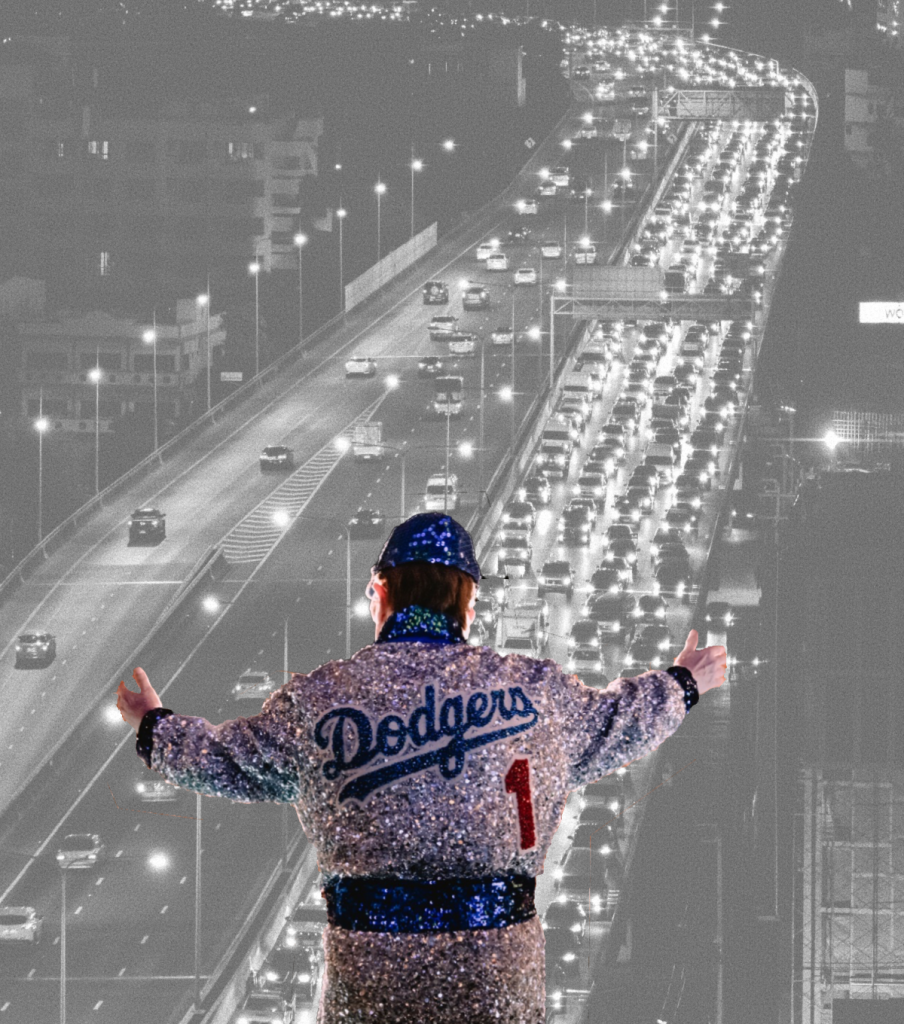 I could write an entire article about how maddening it is to be a music fan in Los Angeles. But I’ll leave a little room for Elton John’s last show at Dodger Stadium on Sunday night.

If you’re a fan of anything involving a large crowd in Los Angeles, then you’re a glutton for extreme punishment. The kvetch begins with traffic and ends with traffic. In between, it involves depressing decisions over how early to leave a spectacular show or game (or, alternatively, how late to remain).

I’ve heard sad stories of parents running away with their kids from SoFi Stadium at the end of the third quarter. Or multi-hour traffic snarls for those that enjoy shows till the end.

Sure, there are workarounds. You can take the subway to the Hollywood Bowl (walk uphill from the Hollywood & Highland stop). Or simply enjoy smaller gigs. Or watch it on YouTube or TV (in the case of Elton John’s last show, it was simulcast on Disney+). But the big shows at the big venues — whether the Greek Theatre or Dodger Stadium — are logistically ugly for 99% of those in attendance.

You can only buy your way out of so much headache. And when it comes to clusterf—ks, Elton John’s three-night stint at Dodger Stadium was epic. There were even people brutally beating each other up in the parking lot — a heinous event, of course. However, if you’ve attended a show at Dodger Stadium, you understand the frustrations that ultimately landed people in the hospital. In my case, it was a 90-minute snarl at 3 mph to find parking after a two-hour snarl on multiple LA freeways.

The traffic sucks in LA. But it’s the weather, right?

Live in Los Angeles, and you always have this pros-vs-cons discussion. But YES, the weather is a big plus. Here in Los Angeles, you can enjoy Elton John in late November with simply a toasty sweater. Outside! Perhaps it’s an LA cliche, but for that moment, it’s worth it. I can enjoy a cinematic rendition of ‘Rocketman’ without gloves, a hat, or even a jacket. Winter nights in Southern California are usually a treat, especially when there’s outdoor music involved.

(Also worth mentioning: all this is excellent news for the now-resurgent live concert industry. Snarled traffic jams, hours-long delays, sky-high prices, and Ticketmaster meltdowns are ‘good problems,’ especially when coupled with heavily-attended gigs like this one. Problems to resolve, certainly. But it’s important to note that every single fan is willing to endure the hassle — and pay handsomely for the privilege.)

So how was Elton John’s last show, anyway?

For starters, I’m loath to believe the ‘last show ever’ marketing BS. Even Elton admitted that ‘other shows’ are potentially in the future. You see, this was the last tour ever. Which might also be a fib. So perhaps this wasn’t the last chance to see Elton John live — but it might have been the last chance. Which was enough to pack this stadium three nights in a row — including Sunday night. Even with a simulcast on Disney+.

“Last night, I played my 204th and final North American tour show ever,” Elton John tweeted the following morning. “I can’t thank each and every person who was a part of it, at Dodger Stadium and watching at home, enough for the most incredible night. I love you all and you will forever be in my heart.”

So why is Elton hanging it up? Well, he is 75, though that was hardly a factor. Elton was decked out boots-to-glittery glasses, with enough piano-pounding pizzazz to easily fill a stadium. Elton’s a grizzled veteran when it comes to playing stadiums, and it showed. An obviously gifted performer, Elton knows how to handle a big crowd, and has more than 40 years of experience refining the craft.

Indeed, Elton’s still got it — and this show was historically resonant.

Elton John first played Dodger Stadium back in 1975 while his career was surging upward. On stage, Elton waxed about his first gig in Los Angeles at ‘The Troubadour club,” which he aptly noted still stands (and, importantly, survived the pandemic). Los Angeles Times critic Robert Hilburn wrote an exuberant review of that gig, which Elton credited for jump-starting his career.

Indeed, there was a palpable sense of history this weekend, with Elton and the band delivering a spirited and memorable performance. There was something spontaneous and musical about this gig, lending a once-in-a-lifetime uniqueness to the experience.

No, this wasn’t a string-of-hits performance with a long-form variation on one or two classics. Instead, nearly every Elton John classic was arranged into a longer-play performance piece. Arguably, many involved long-extended bridges. But these weren’t live versions of the recordings, making the songs critically different.

But there was something else happening on stage — vibrant enthusiasm.

Sounds corny, but that’s not always the case with expensive mega-tours — especially those involving legendary rockers on final treks. The band was also playing a bunch of Elton’s b-sides (or ‘non-hits’), which is either good or bad depending on your perspective. Most people come for the hits, though these old guys were playing their hearts out, and you could feel it in the rafters.

Yes, you could pay thousands for a front-row seat and ogle at Paul McCartney. But for most people, including those on the floor in front of the stage, you’re watching ants dance around. And hoping there aren’t too many tall people in front of you.

And forget about high-end audio. Instead of fine-tuned acoustics, stadium shows feature massive speaker stacks pumping the audio throughout the stadium. Toss in thousands of people talking, screaming, and standing up, and you’ve got the Elton John show in a nutshell.

Also: there were fireworks. At the tail end of the gig, Elton brought out special guests Dua Lipa, Brandi Carlile, and Kiki Dee to cap things off before the explosions began.

By that point, however, I was back home walking my dog. You see, I booked out in the ‘third quarter’ to make it back to Santa Monica. Lame, right? Maybe so. But the drive back was lightning fast. Amazingly, it took nearly two hours to park the car at Dodger Stadium, but just 30 minutes to reach my own garage across town.

And the show was still going when I got back. As my pooch Arthur traipsed around the neighborhood, I heard ‘Goodbye Yellow Brick Road’ blaring out of a first-floor apartment. Three women were drinking and dancing while watching the Disney+ performance. A neighbor across the street futilely screamed to keep it down. Fun times — though it felt as if the gods were using my dog walk to present me with the obviously smarter choice.

For the price of my $15.99 Bud Light tall boy at the stadium (seriously), these women were enjoying an entire bottle of wine. And skipping hours of driving, aggravation, and monstrous expense. Not to mention enjoying the entire performance, start to fireworks-exploding finish.

But I was there, goddammit! Well, at least for part of it.