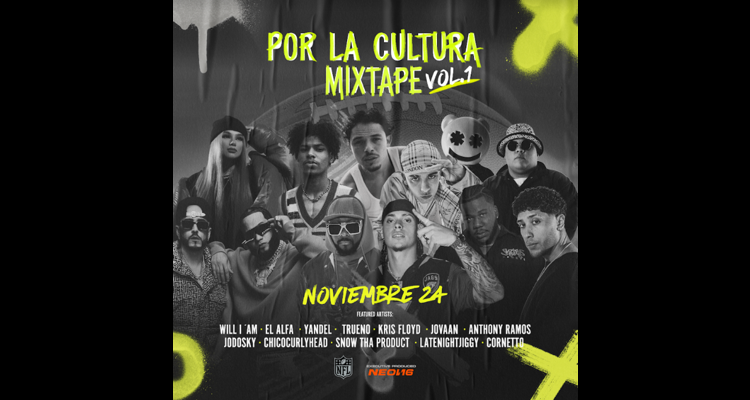 The NFL taps Will.I.Am, Anthony Ramos, El Alfa, Yandel, and more for Por La Cultura Mixtape Vol 1 — music that will feature at the league and club levels throughout the season.

“The Por La Cultura Mixtape: Volume 1 is one of many league efforts to connect more deeply with Latino fans, especially through music which is consistently shown to be a leading passion point for this community,” says Javier Farfan, Cultural Strategist at the NFL.

“NEON16, as the premier Latin music powerhouse, was the perfect partner to bring this concept to life and imbue the energy, passion, and overall football vibe to each track that, at its core, connects high energy and high impact sounds with youth and pop culture.”

“It’s a dream come true for One Six and NEON16 to partner with the NFL and these talented artists to create a modern, Latin-focused soundtrack for this amazing sport that connects with so many people worldwide,” notes Ivan Rodriguez, One Six and NEON16’s Head of Creative.

“This compilation is an important cultural milestone to continue celebrating the inclusion of all the voices and backgrounds that make up the DNA of this global sport. Latinos activos!”

“Giving emerging artists a platform was a key objective in this project, and the breadth of talent and genres in this collection helped cultivate relationships, energy, and inclusivity,” adds Lex Borrero, NEON16 Co-Founder.

“Anthony Ramos’ song, ‘Latino Activo’ for instance, is powerful and intentional, and Snow Tha Product brings her strong, Mexican energy to the project as well. It’s these vibes that transcend borders and evoke passion, pride, and energy — key elements that reflect the game of football and what the league represents for fans.”