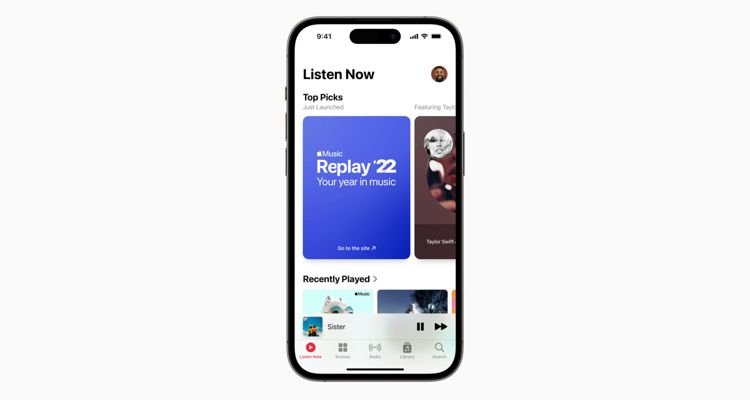 Starting today, Apple Music subscribers can learn their top songs, artists, albums, genres, and much more in a completely overhauled Replay experience. Listeners can continue checking their 2022 Replay until December 31 and then view weekly insights into their listening habits beginning in 2023. The company also revealed its 2022 year-end charts.

This year, Apple Music listeners can discover their top songs, albums, artists, genres, and more. Superfans might even find themselves in the top 100 listeners of their favorite artist or genre. All insights presented on Replay are optimized for sharing with friends and family on social media and messaging platforms.

“When we first launched Replay, the feature became an instant fan favorite on Apple Music, and we really wanted to develop the experience further and make it even more special, personal, and unique for subscribers,” said Oliver Schusser, vice president of Apple Music and Beats.

“The music we enjoy throughout the year becomes like a soundtrack, and it’s really fun to be able to go back and relive those meaningful and memorable moments over again.”

Apple Music also revealed its year-end charts, 2022 top songs, top Shazams, top fitness songs, and most-read lyrics. The Kid LAROI and Justin Bieber concluded the year at number one on the Top Songs of 2022 with their collaboration “STAY,” released in the summer of 2021. The song spent an impressive 51 days atop the Daily Top 100: Global charts, where it has not dropped since its release.

Hip-hop continues to lead the Top Songs chart, with 32 of the top 100 songs of the year in that genre. Pop came in second place with 23 songs on the chart, followed by R&B/Soul with 11 songs. Latin came in fourth, and J-Pop fifth, with eight and six songs, respectively.

Bad Bunny, Apple Music’s 2022 Artist of the Year, became the first Latin artist to have the biggest album of the year with Un Verano Sin Ti. Only four months after its release, the album had already become the biggest Latin album of all time on Apple Music by lifetime streams.