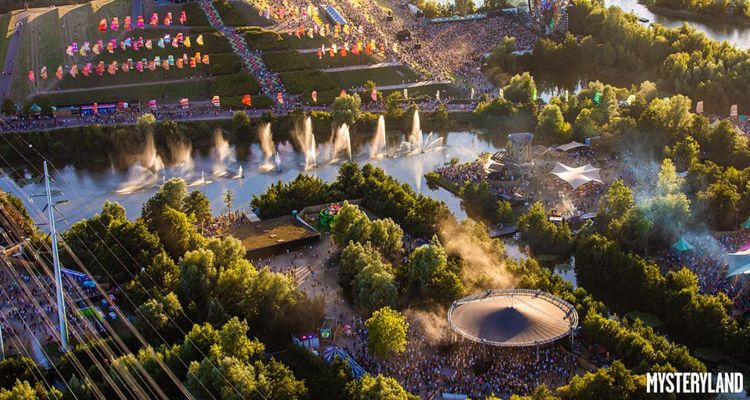 Next year, approximately 80% of the festival’s power consumption will consist of green grid power, while the remaining 20% will primarily consist of flexible, sustainably-generated energy. Mysteryland will enter a new phase of sustainable planning for its 30th anniversary in collaboration with the Municipality of Haarlemmermeer, Recreatieschap Spaarnwoude, and ID&T Group.

The green grid power that will fuel most of Mysteryland from 2023 will be supplied by the local energy company Tegenstroom, owned by the Municipality of Haarlemmermeer. Tegenstroom provides 100% locally-generated solar power produced by entrepreneurs in the region — one of whom is Jos Koechhoven, whose land has been part of Mysteryland’s campsite for years.

Electricity cables will be dug deep underground, while underground wells have been constructed at the various main stages and other places where a large amount of power is needed. Containers will be placed on these wells, similar to a large-scale power socket fed with solar power accrued from local businesses.

“We are extremely proud to take this important step forward together with the other parties involved and hope this will inspire other organizers to do the same,” says Milan Raven, managing director of Mysteryland.

“This effort fits perfectly with our recent signing of the Green Deal Circular Festivals, which focuses on sustainable innovation and in which we have promised to work hard to become more circular and climate neutral in the future.”

“Haarlemmermeer and Mysteryland both strive for innovation and sustainability,” says Marja Ruigrok, councilor for Economic Affairs, Traffic, Transport, and Culture, Haarlemmermeer. “Local, green electricity and a mighty beautiful festival — that sounds like music to the ears of Haarlemmermeer!”

In addition to its planned commitment to reduce Mysteryland’s CO2 emissions, Netherlands’ longest-running electronic dance music festival is one of many parties that signed the Green Deal Circular Festivals (GDCF) during Amsterdam Dance Event in October. This agreement encourages sustainable innovation within and collaboration between Europe’s festivals, aiming for festivals to be primarily circular and climate neutral by 2025.