The Sound of the Metaverse — What Does the Future Hold? 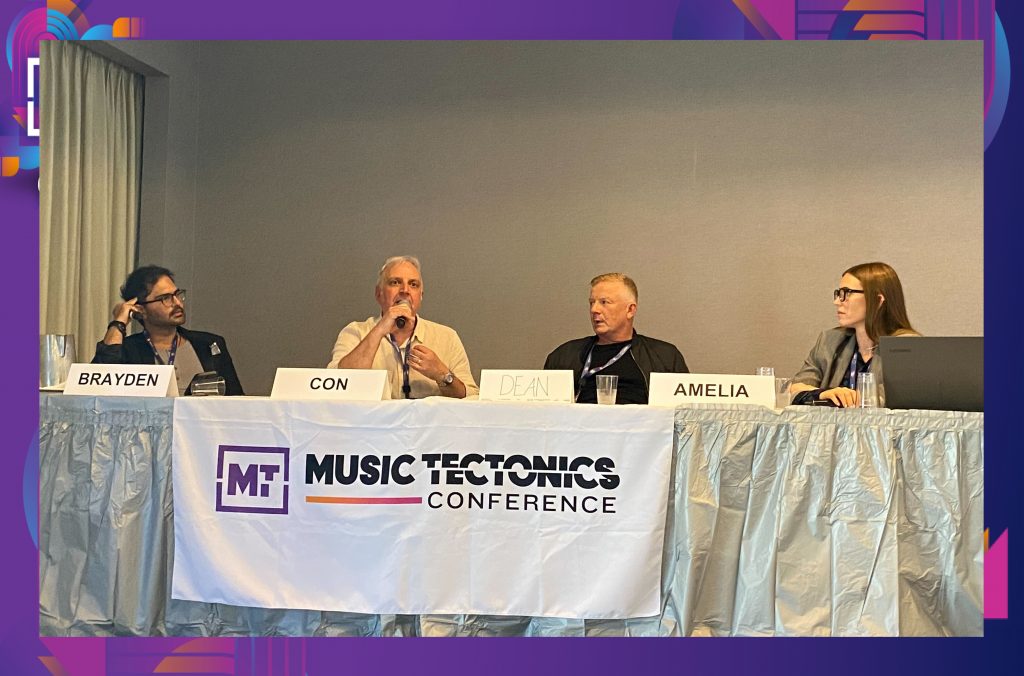 As part of Music Tectonics 2022, a panel on the music industry’s intersection with the idea of the nebulous ‘metaverse’ reveals there’s still a long way to go here. Let’s dive in.

The following was created in collaboration with Tuned Global, a company DMN is proud to be partnered with.

Following the collapse of the FTX exchange, faith in web3 technology and the crypto universe as a whole is shaken. Meta’s vision of what a ‘metaverse’ is hasn’t differentiated itself from any of the hundreds of spaces that have come before it. Meanwhile, some web3 spaces like Decentraland are ghost towns–with monthly active users drying up as users flee crypto adjacent spaces.

The music industry is soldiering on with virtual experiences like Megan Thee Stallion’s recent VR experience, or the NFT scavenger hunt from Pixelynx, the DJ’s web3 startup. Each of these experiences provides a real-world example of how web3 tech can intersect with the real world to provide an entirely new experience.

“I think that blockchain solves a lot of problems in [the music] industry,” Brayden Pierce of Soundromeda says. “First and foremost–on how royalties are paid out. It’s a long and rigorous process. It’s been integrated through PROs and I think you can simplify the whole process. Essentially, it would save a lot of time, which means a lot more money, by putting it on blockchain and just having it be more of an instant payment instead of waiting for 30, 60, or 90 days for the royalty to come in. That’s certainly one way. I think there are a lot of ways that you can apply blockchain technology to make things more efficient.”

Con Raso, of B2B music and streaming tech firm Tuned Global, shares that his focus is more on helping local artists utilize the power of web3 technology like NFTs.

“The area that we’ve been doing a number of initiatives in is with our DSPs in various local markets. They’ve often got either niche projects–like maybe the fitness industry or the gaming industry. But if we look at some of the emerging markets and we’ve got apps in the Pacific Islands, Ethiopia, Ghana, other parts of Africa, through to the major areas,” Raso says of Tuned Global’s strategy.

Tuned Global has become a fast growing, major player in the music-tech space. We have been monitoring their growth from branded campaigns with major brands, to partnering to provide cleared, headache-free music in fitness apps, as well as provide the backbone for emerging regional streaming players. Now, the company has placed a high-emphasis on supplying music for metaverses, and while attending their panel we heard what they think about this growing opportunity.

Raso added, “We’ve been focusing a lot on how we can bring additional value to those local artists and help them actually make a decent amount of money through the DSP. Blockchain for us has been–can we start to bring NFTs both into a web2 and web3 world? Can artists now start to actually bring forward revenue by potentially fractionalizing rights? Can they start to actually be more in control of their revenue streams and, yeah, ultimately, bring more control in the ability for many of these cultures to really exist from a music perspective where it’s such a struggle?”

Dean Wilson of Seven20, and longtime manager of deadmau5, adds that he believes blockchain technology will help revolutionize the music industry in making it a two-way street of value.

“From a management point and a builder–and an investor–we want transparency and we want to be able to connect with our fans in a really simplistic way and not be told how to do it by gatekeepers and then having to pay that platform to be able to talk to our fans,” says Wilson. This remains especially relevant as the future of Twitter appears to be on the rocks as Elon Musk makes vast changes to the platform.

“And I think blockchain is finally going to allow us to have a two-way street of value. it’s finally going to allow us to be able to give things to our fans. Can’t give anything to our fans right now. If we want to do that, we have to pay Mark Zuckerberg or somebody else. So blockchain, as in the technology layer, is the first start of the foundation before everything else that we’re going to be able to build on top of digital currency, whether it be entities or collectibles.”

What are some of the broader ways in which music and web3 can integrate into the broader crypto landscape?

So far, not many. Con Raso agrees with that assessment. “At the moment, it’s very much an emerging area. I think the audience and platform is an interesting place, but it’s probably still struggling from a content perspective. We play music in that space. I think broader than that, yeah, we’re certainly working internally on our own experiments around what does it mean to have a web3 experience that includes music?”

“We had some concepts and really struggled to have partners come up with those concepts,” Raso adds. “And we thought, “Well, I guess we just have to build this ourselves and show people how it works.”

Music for web3 and metaverse use is a complex issue that entails many moving parts. Each step of the process may present new challenges–both technical and legal in nature. To better survive those challenges, check out this pocket survival guide from Tuned Global–one of the biggest B2B streaming technology providers in the music industry.

The company is currently helping numerous companies navigate the complexity of music in web3. Tuned Global recently partnered with Digital Music News to share some of its expertise in this area.

“We’re currently building in Decentraland and being able to have areas for artists and our clients to be able to brand and have an opportunity to showcase their artists in that space,” Raso says. “Because I think we really need that experimental nature of people being able to come in to an area that doesn’t become too technical for them to execute. And then what we do is we learn through those experiences how to change the access points.”

“We’re not looking at it as being just a web3 approach though. We’re saying there needs to be an access point from web2 to web3 and be able to have people sort of traverse from a web2 experience. It might be an Apple, might be something else into a web3 world and start to taste that world. We’re all sort of waiting for that great execution that’s in the market.”

Part of that problem is how fractured what the perceived ‘metaverse’ is at the moment.

“One question is always interoperability, right?” adds Raso. “So there’s a lot of different things that are described as the ‘metaverse’ at the moment–whether it’s Sandbox, Roblox, Decentraland, tons of others. And so how do we build something? When we think of the internet, we think of being able to move seamlessly between areas of the internet.”

“But that’s not true with what the metaverse is at the moment. So I think the next phase is certainly where interoperability–at least to a degree that allows potentially a wearable that you have in one world to be able to be used in another world–are really important.”

As you can see there is no simple universal idea as to what the ‘metaverse’ is. Some aspects of web3 technology will certainly revolutionize the music industry–blockchain has the potential to revolutionize artist payments, fan engagement, and more. But creating spaces in web3 is still very much a gamble at this early stage. Still, these early pioneers are paving the way for positive fan experiences powered by new technology and driven by a web3 backbone.

In the coming months, the company plans to launch several new initiatives in key web3 environments, providing turnkey virtual locations and streaming or minting tools for any music and media-driven company to dive into fresh, new territory.

We are excited to see what Tuned Global has in store for us as this technology continues to grow in importance to major players in music. Hopefully, we will see them on stage at SXSW 2023 alongside Decentraland, HFA and Redd Smith, discussing ‘How to Build and License Web3 Music Projects at Scale.’