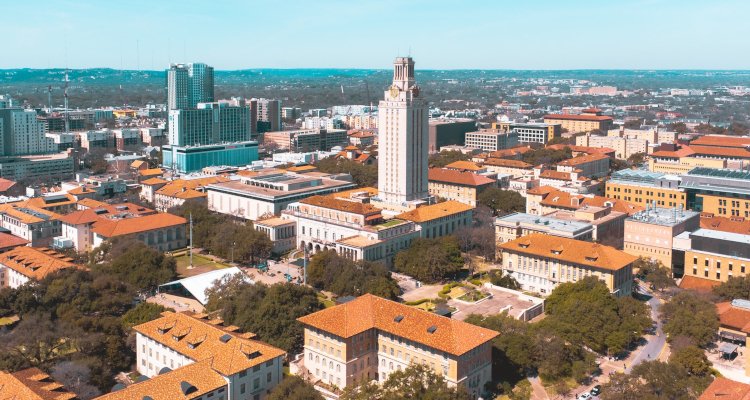 An aerial shot of the University of Texas at Austin, where a TikTok ban has gone into effect. Photo Credit: Chirag Tripathi

With a number of governors having banned TikTok on state devices due to alleged user-privacy shortcomings, the crackdown is now reaching public universities including Texas A&M University and the University of Texas at Austin.

Since November, north of 20 state governments have prohibited employees from using the controversial video-sharing app, which has long faced security-related criticism. Wisconsin last week outlawed the service’s use on government devices, joining the likes of Ohio, Kansas, New Jersey, and South Dakota, to name some.

Owned by ByteDance – a portion of which belongs to the Chinese Communist Party – TikTok has reportedly enabled its Beijing-headquartered parent company to monitor the locations of specific Americans. The FBI and the FCC have in recent months expressed concerns about the app, which is facing a disconcerting lawsuit from the State of Indiana.

Against this backdrop – and as TikTok grapples with calls for an outright ban in the States as well as growing regulatory scrutiny in Europe – the University of Oklahoma and Alabama’s Auburn University in December barred the app’s use on campus Wi-Fi.

The important move, which likewise prompted the deletion of the universities’ official TikTok accounts and compelled staff to shut down their own profiles, arrived after the short-form platform was banned on congressional devices.

And as initially noted, the long-overdue clampdown is gradually extending to different universities yet. Local outlets are reporting that the aforesaid Texas A&M and the University of Texas at Austin have made TikTok unavailable via on-campus internet connections.

“Recently, UT Austin began the process of removing TikTok from all government-issued devices, including university-issued cell phones, laptops, tablets and desktop computers,” the educational institution wrote in a letter to students. “Today, the university blocked TikTok access on our networks. You are no longer able to access TikTok on any device if you are connected to the university via its wired or WIFI networks.”

Universities in South Dakota, Iowa, Georgia, and Alabama have also banned (altogether or in part) TikTok, according to the report. Particularly given the prevalence of younger users on the platform, it’ll be worth monitoring the commercial byproducts of the development in the approaching months.

Despite TikTok’s cultural relevance and far-reaching role in the contemporary music industry, experts have suggested that extremely similar competitors like YouTube Shorts would seamlessly take center stage in the event of the former platform’s ban throughout the U.S.

YouTube Shorts is set to implement a revenue-sharing model next month, and notwithstanding the described operational obstacles, TikTok has hit the ground running in 2023, including with a Rotana Music licensing pact, sliced advertising costs, and a “talent manager portal.”