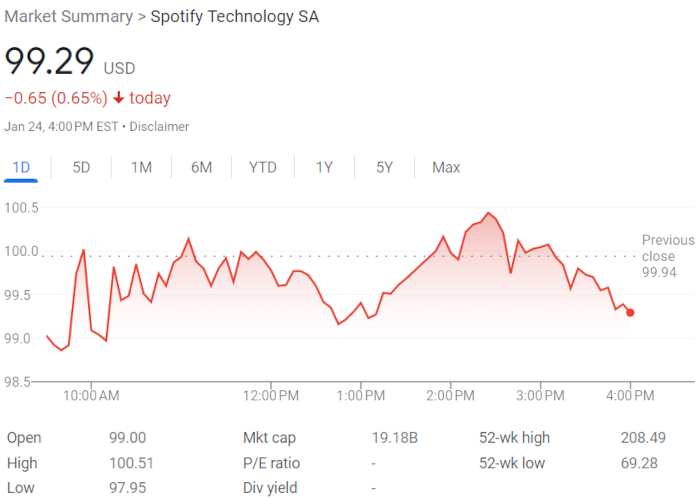 The per-share price of Spotify stock (NYSE: SPOT) has rebounded past $100 for the first time since September, after the Stockholm-based company announced plans to trim its workforce by about six percent.

When the market opened yesterday, Spotify stock jumped to more than $102 per share – representing an approximately 22 percent improvement since 2023’s beginning. And after hovering around the $100 mark during today’s trading, SPOT finished at a little over $99.

As noted, the initial valuation hike arrived as the streaming platform announced plans to lay off six percent of its 9,808-person team, or roughly 589 individuals. Explaining the latest in a line of personnel cutbacks, Spotify head Daniel Ek acknowledged an overarching “effort to drive more efficiency, control costs, and speed up decision-making” within his company, which has made all manner of acquisitions in recent years.

To be sure, Spotify has injected billions into podcasting alone – including by bankrolling programming like The Joe Rogan Experience and scooping up a series of businesses in the space.

But amid an abundance of tech sector and music industry layoffs – not to mention a pursuit of podcasting profitability as well as a significant revenue increase – Spotify is evidently rethinking the aggressive strategy of years past.

Particularly given the signs of an imminent price raise and the market’s response to the layoffs, it’ll be worth following the performance of Spotify stock throughout the remainder of 2023.

On the other side of the coin, Jefferies 12 days back reduced its SPOT rating from buy to hold and set a $95 target price.

“We don’t see gross margins returning to 2021 levels until 2024 and above 30% well beyond that,” Jefferies analyst Andrew Uerkwitz wrote in explaining his Spotify stock position. “Until we see signs of a reacceleration, we’ll move to the sidelines.”