This Is War: MegaUpload Now Suing UMG Over DMCA Abuse…

Get ready for a messy war, one that involves very big companies and quite possibly, very big artists. On Monday afternoon, MegaUpload filed a lawsuit against Universal Music Group in the US District Court of Northern California (San Jose), alleging abuse of DMCA power.  The cyberlocker giant is now claiming that UMG knowingly ordered YouTube to yank its ‘MegaUpload Song’ without a justified copyright claim, rendering this for viewers on Friday: 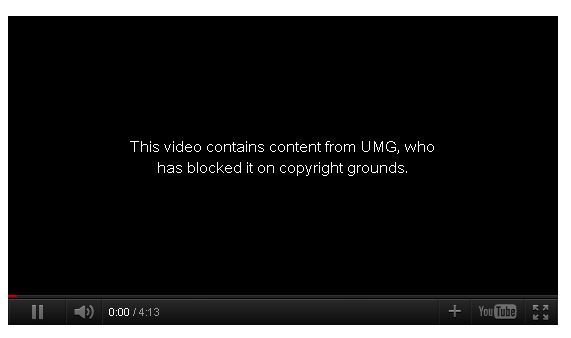 UMG has a quick pipeline into YouTube, but it remains unclear exactly what the copyright violation was. “On or about December 9, 2011, Defendants, and/or their representatives, viewed the
MEGAUPLOAD SONG VIDEO and decided to issue one or more DMCA takedown notices
to YouTube and others despite their knowledge that the use of the MEGAUPLOAD SONG
VIDEO did not infringe on any of Defendants’ copyrights,” the filing states.

> The complete filing is available here.

In a brief response to Digital Music News, Universal Music Group did not specify the direct violations, but did point to at least one unhappy artist.  “This is an ongoing dispute that surfaced several weeks ago with respect to the unauthorized use of a performance from one of our artists,” a top executive at the label described. “We heard from a number of our other artists (and their representatives) who told us they’ve never consented to being portrayed in this video. As a result, at least one of them has already sent a takedown notice for this unauthorized use.”

That artist sounds like will.i.am, who plays a very prominent role endorsing MegaUpload throughout the video.  But according to a recently-published article in the Hollywood Reporter, will.i.am attorney Ken Hertz claims his client did not authorize the publication of the ‘MegaUpload Song,’ at least in its current form.  The disagreement is complicated by the video itself, which features will.i.am repeatedly stating, “When I want to send files across the globe, I use MegaUpload,” while also appearing to sing throughout multiple choruses.

In response, MegaUpload pointed to comprehensive agreements authorizing this use, opening the very real possibility of another, separate lawsuit ahead.  In fact, the claim points to a dedicated recording session at Roundhouse Studios in Auckland, New Zealand, ‘primarily for the purpose of recording a promotional song and video’ and at ‘substantial expense to MegaUpload.’ That expense included the involvement of Printz Board, who is closely associated with the Black Eyed Peas and also has an agreement with UMG-owned Universal Music Publishing Group.

The question is what other artists have an issue with this spot, and whether MegaUpload neglected to properly secure their consent despite the recording session and explicit endorsements.  Also entangled in this mess is Russell Simmons, Kanye West, Diddy, Game, and Alicia Keys, all of whom are also featured prominently in the song. The complete list of musicians and artists involved in this video, according to the lawsuit, are: