Here’s a little industry secret: if you want to sell a lot of albums, death helps.  And the more premature, shocking, and tragic the departure, the bigger the post-mortem windfall.

Here’s what US-based sales of Whitney Houston’s ‘Greatest Hits’ album looked like last week, according to Nielsen Soundscan stats shared with Digital Music News.  Houston was pronounced dead on Saturday, February 11th, so this reflects sales for the week ending Sunday, February 12th.  Which means this counts just one full day of sales and a small taste of things to come. 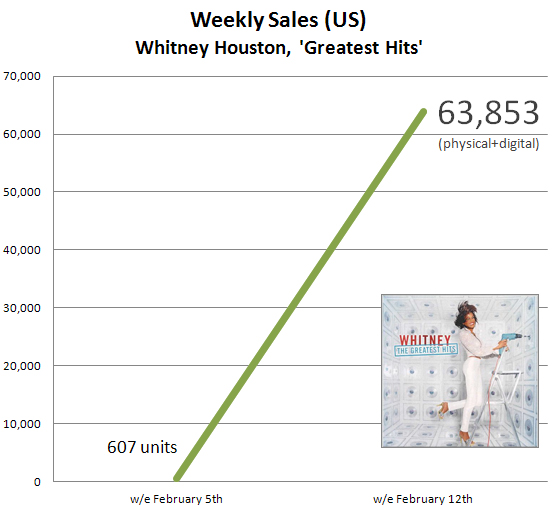 That’s more than a 10,000% gain.  But that’s just part of the picture: according to stats shared by Billboard, more Whitney Houston albums were purchased in that 24-36 hour window than all of 2011 and 2012 combined, leading up to the death.

And here’s just a small sampling of the surge, which mostly happened across more immediate, ready-stocked digital channels.