VEVO’s Traffic Is Taking a Bath…

For all the bluster and big numbers, all the “I’m leaving you, YouTube,” there’s this. VEVO’s traffic has been dipping substantially since last year, according to comScore stats unearthed by MusicAlly.  Take a look. 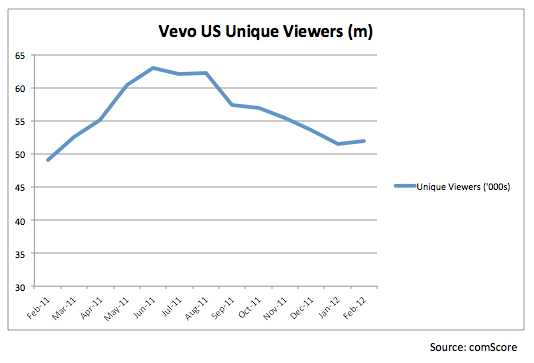 Make no mistake, VEVO’s no slouch on traffic.  It’s just that it’s slouching from last year, and not showing that heady growth we thought existed. According to comScore, US-based visitors reached 52 million in February, with a total of 697 million videos views.  That’s down roughly 17.5 percent from a peak of 63 million uniques in June of 2011.

MusicAlly says that mobile could be the wildcard here.  “The caveat: comScore’s figures don’t include mobile access to Vevo from its apps – we’d be interested to see if the growth in popularity of the apps is responsible for the online decline,” wrote Ally’s Stuart Dredge.

Possibly, except that a gigantic share of VEVO’s traffic comes from YouTube (we’ve consistently heard 90 percent or even more).  But since June of 2012, YouTube traffic briefly surged before returning to previous levels – and ultimately dropping a scant 1.2 percent.