If there was ever a case for compromise, it’s this.  According to the latest calculations, Pandora and Sirius XM Radio now account for roughly 90 percent of SoundExchange’s total annual revenues.  Which means that these two companies not only have voting power, they may also have veto power.

The math comes from Live365 attorney Angus MacDonald, who’s been back-of-the-enveloping based on financial statements, legal filings, and other available data.  Earlier, MacDonald calculated that Pandora accounts for 37 percent of the SoundExchange’s total revenue collections, based on year-2011 federal filings and financial disclosures.

But Sirius, with 22+ million subscribers, looks like the far bigger fish.  Indeed, it looks like Sirius accounts for more than half of all of SoundExchange’s annual collections, according to MacDonald.  The breakdowns have been foggy until recently, when Sirius XM entered this as part of its antitrust lawsuit against SoundExchange.

MacDonald pegs most – if not all – of these statutory royalties on SoundExchange.  “At first glance, I thought that figure might include royalties paid to ASCAP, BMI and SESAC, but those are not ‘statutory’ royalties, and Sirius’ lawyers certainly would know the difference,” MacDonald told Digital Music News.

So, loosely setting that figure at $200 million, the updated math now looks like this. 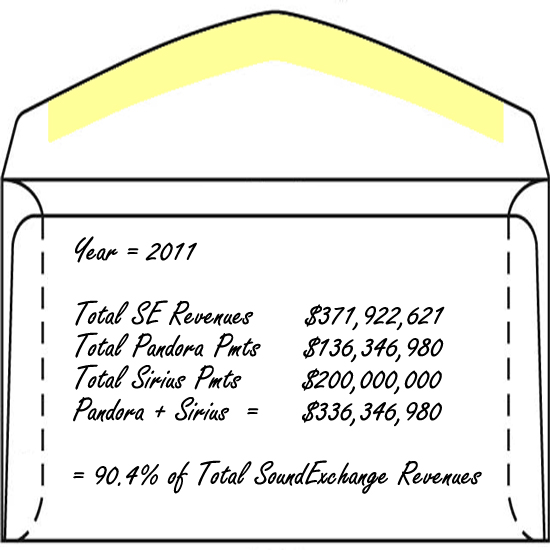