It may not be the cleanest experience, but it is the biggest experience – by a gigantic and overpowering margin.  In fact, nearly 40 percent of YouTube’s trillion-plus annual views come from music videos according to the latest research estimates.  And according to our calculations, that makes YouTube Music bigger than Spotify, Rhapsody, Grooveshark (and Rdio, MOG, Deezer, and eMusic) combined.

Here’s a comparison using five of the biggest players in this space.  It uses figures from the companies themselves, various research groups, and our own back-of-the-envelope assumptions.  Below the graph you’ll find our detailed methodologies and assumptions. 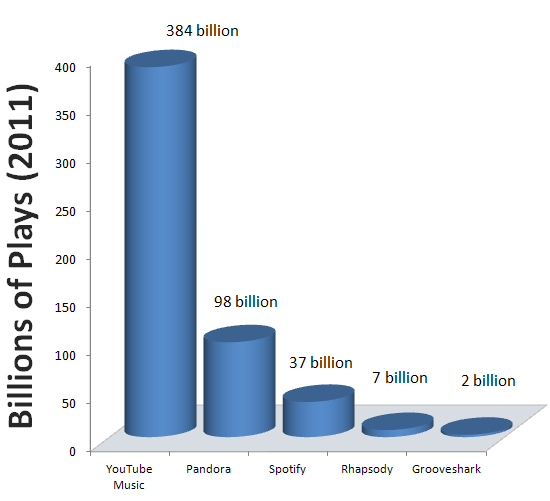 And, please geek out on our methodologies and assumptions.

Based on top-level, 2011 view data of 1 trillion views, as reported by YouTube.  Accustream iMedia Research estimates that 38.4 percent of that traffic is music videos (others peg it closer to 40 percent).

The company reported 8.2 billion hours of radio streaming during its fiscal 2011.  Assuming 12, 5-minute songs in that span, the total number of 98 million is reached (the estimate ignores in-stream ad interruptions, but inflates the average song length).

The Office of Technology Licensing at the University of Florida pegged the figure at 150 million per month in 2010 (we’ve seen this estimate elsewhere).  We inflated to 200 million given very noticeable growth since 2010 as measured by Alexa (though in fairness, Compete shows declines).