What happens when massive legal action is taken against a massively-infringing app? The answer is that a massive number of users are immediately scared away, even if the application itself is still usable.  That was the case with Limewire, a shutdown that took years for the major labels to complete and never killed the application itself.  But according to the results of one study, it did succeed in scaring millions of casual swappers away – not just from Limewire itself but file-swapping entirely.

The Limewire case study was presented on Tuesday by Nielsen, at the NARM industry gathering in Los Angeles.  But this wasn’t another flawed P2P survey involving questions like, ‘so, do you illegally file-share?’ Rather, Nielsen actually installed ‘meter’ software trackers on the PCs of about 100,000 panel participants and closely monitored their behavior before and after the legal shakedown.

Here’s one slide that stood out – it shows a rather pronounced drop in users immediately following the RIAA’s injunction against Limewire in October of 2010.  But previously-installed apps remained intact, meaning that if you simply opened the app and skipped the news the day of the decision, you’d have no idea anything had occurred. 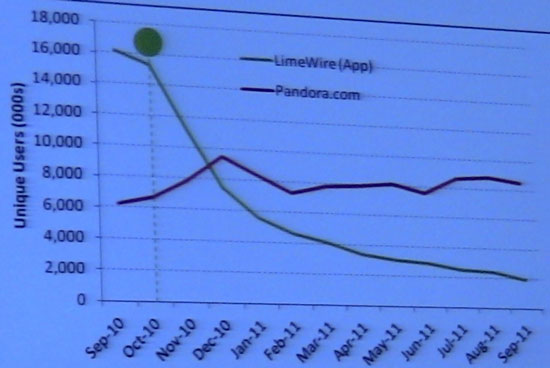 “The number of people using Limewire dropped precipitously following the October 2010 injunction, even though nothing changed in their ability to use the application,” noted Nielsen senior vice president of Analytics and Client Relations David Bakula.  “A lot of this had to do with the publicity surrounding it, the fact that the illegality was staring them right in the face.”

Here’s where it gets really interesting.  The study resumed the following summer (of 2011), when Nielsen found nearly 75 percent (of 13 million tracked users) had abandoned Limewire, with roughly half of those ditching file-swapping entirely (about 5 million).  The other half simply went to another file-swapping service, while 1.2 million new Limewire users actually entered the fold.  Which means that ‘net-net,’ the RIAA’s smackdown killed off about a few million swappers, for good. 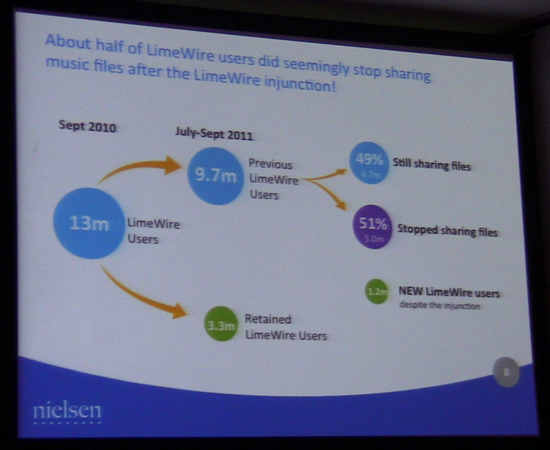 But there’s a big problem with all of this: over time, the amount of swapping volume (of total files) never really decreased, simply because the heaviest users just went somewhere else.  And the heaviest users account for a very large percentage of total files traded.  “About 20 percent of users account for 60 percent of the volume of downloads,” Bakula relayed.  “So you can see this is almost the 80/20 rule here.”

Which means that crushing Limewire was a great way to scare swappers away, but not a great way to lower file-swapping volumes overall.  Which could be counted as a victory, if those casual users ultimately develop habits around buying.

This sort of research may have informed the overwhelming level of force employed against MegaUpload – a plan that caused a quick-and-widespread chill across the entire locker space.  “Pursuing service providers one-at-a-time is probably not an effective tactic if the intended goal is to reduce the number of illegal music downloads,” Bakula told the pro-content crowd.  “But a broader goal of going after these en masse or ‘go big or go home’ is really how we should be pursuing this.”