Two-Thirds of All Apps Are Never Downloaded…

This all sounds depressingly familiar, and probably speaks volumes on broader media consumption patterns.  According to some very sobering and flattening stats emerging on the app space, only the tiniest sliver of top-ranked apps generate any meaningful downloads at all.  In fact, pouring through the numbers from Berlin-based Adeven, roughly two-thirds of all apps in Apple’s App Store are never downloaded – and are essentially zombies to consumers.

That’s about 400,000 apps out of a total of 650,000, leaving 250,000 with any action at all.  But according to Adeven, most of those are also languishing.  “The reality is there are only a couple of thousand apps that really make some kind of downloads,” Adeven CEO Christian Henschel told GigaOM.

And, an even smaller percentage are generating anything meaningful on the revenue side.

“The top 25 tend to be the same companies who spend millions of dollars to get to the top of those lists.  If you’re an independent, small app publisher, then it’s really tough to be discovered.”

This sharply resembles the music space, where artists boosted by major label promotion tend to dominate the charts.  That is, with shocking homogeneity across radio, iTunes, Spotify, BigChampagne, and Amazon.  And, make no mistake, those hits are often supported by hard dollars – sometimes quite directly.

Visibility is critical, which goes a long way towards explaining why Universal Music Group demanded the removal of Grooveshark’s app from both the App Store and Google Play.  On the more open Android side, users can still find the Grooveshark app, though at the Bandwidth Conference in San Francisco last year, a Grooveshark executive told Digital Music News that this was essentially the same as being removed.

Adding more context to the picture, researcher Flurry noted that early-stage opportunities are mostly vanishing as app environments become more mature.  “As industries mature, we expect established players and brands to invade from other platforms, depressing opportunities for many early entrants,” the group explained.  “Along with this, we expect to see market revenue concentrate among fewer larger players.”

In other words, the rich are getting richer.  Here’s a breakdown showing the complete revenue domination by the top 100 apps.  That’s not very many. 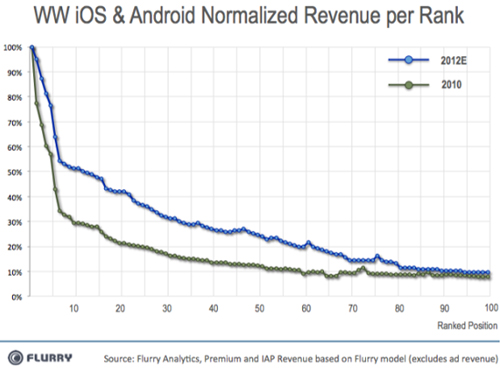