It Was 2012. And Streaming Hadn’t Yet Gone Mainstream…

Apple sells billions of downloads a year, but the iTunes Store has been around since 2003. And before the iPod debuted in 2001, pioneering competitors were peddling to the niche.  It just takes time for things to go mainstream, no matter how compelling, life-improving, or game-changing a new product or service seems.

So where does streaming fit into this picture?  There’s a strong argument that streaming is still in its pre-mainstream infancy: Spotify has 4 million subscribers worldwide, and is approaching 1 million in the US, all of which is nothing compared to the broader population.  These early millions may simply be the minority of super-dedicated music fans, tech-geeks, or ‘early

So what about about the great untapped masses?  That’s the target for Rara.com, a relative darkhorse in this race with ambitions towards the more mainstream user.  That is, the less discerning listener that doesn’t spend hours curating playlists, doesn’t research obscure recordings, and rarely seeks out new stuff.  The type that wants to be told what’s good. 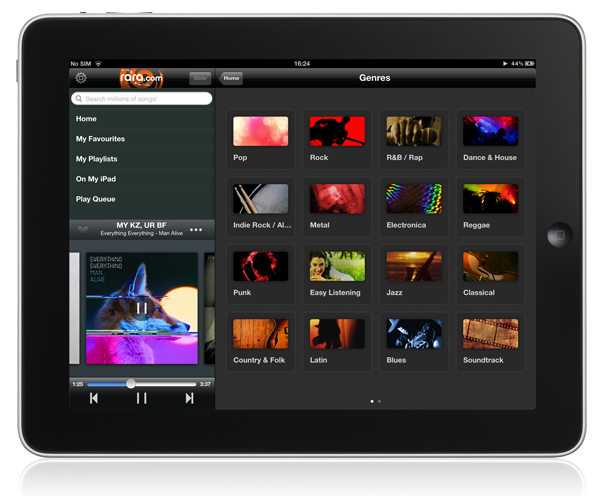 Get past the schlocky clip-art, and there’s an idea at work here.  Rara believes that mainstream users want different things, and most importantly, they want to be programmed to.  Which means pre-fab’d playlists and mood-inspired collections, not roll-your-own playlists and time-consuming discovery.  “We believe there’s a big group that has yet to try streaming services, and we want to attract the mainstream user that just wants the music they feel like listening to,” Rara director Tim Hadley told Digital Music News this morning.

“They just want the music to be there.  We’re very much focused on providing the music you feel like listening to.  You don’t see long lists of stuff on Rara, you see a pictoral, easy- to-use interface.”

That said, there’s meat on this bone.  Omnifone is powering the backend on this brand, and licensing is coming from all majors, a large number of indies, and digital distributors like the Orchard.  As of this morning, the collection totals 18 million, with apps across the web, Windows 8, iPhone, iPad and Android.  Rara, the streaming service you’ve never heard of, is now slotted in 27 countries after a hectic ramp-up period.  That includes the US.

Sounds ambitious, though let’s be honest: Rara could easily get brothed into a soup that now includes the heavily-funded Deezer, Spotify, Rhapsody, Rdio, and Xbox Music, among others.  But Hadley thinks that early-stage ‘winners’ like Spotify are catering too heavily towards music-obsessed early adopters, and the evidence is on the UI.  “Other interfaces are based on file-sharing experiences; we’re not focused on that kind of user,” Hadley continued.  “We’re focused on someone that wants a very slick, beautiful to use, very colorful interface.” 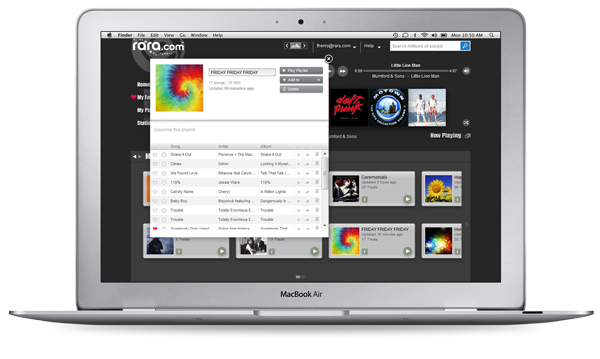 There’s another possible twist here, which is that more mainstream users simply consume less.  Which means greater per-stream payouts for copyright owners – that is, if and when these masses arrive.

Written while listening to araabMUZIK.