Pandora cofounder Tim Westergren is now dumping roughly $1 million in company shares a month, part of what appears to be a broader divestment schedule that started in January.  That has generated payoffs of roughly $9.23 million in 2012, according to published details and forms from the Securities & Exchange Commission (SEC).  The sell-offs, specifically tied to pre-IPO shares, were first tipped by music industry attorney Christian Castle on MusicTechPolicy.

Castle notes that the schedule probably started after a mandatory, post-IPO freeze of 6 months.

“This is almost always a sign of what is probably an insider selling plan (used to be called a 10b5 plan and maybe still is).  These plans are designed to allow insiders like Westergren to cash out their stock positions (especially pre-IPO stock options for which they have exercised) even if they are in possession of material nonpublic information at the time of the sale.  (No buying and selling or ‘trading’, just selling).”

In other words, authorized insider trading, according to established rules on the matter.  Generally speaking, officers and executives of a company are prohibited from dumping (or acquiring) their own shares based on specific, actionable information not available to the public, but can freely trade based on generally-available information.

The series of divestitures are detailed in a series of publicly available, SEC documents like this one.  SEC Form 4 (secform4.com), a site focused on insider trading, also shows the pattern quite clearly using federally-mandated disclosures. 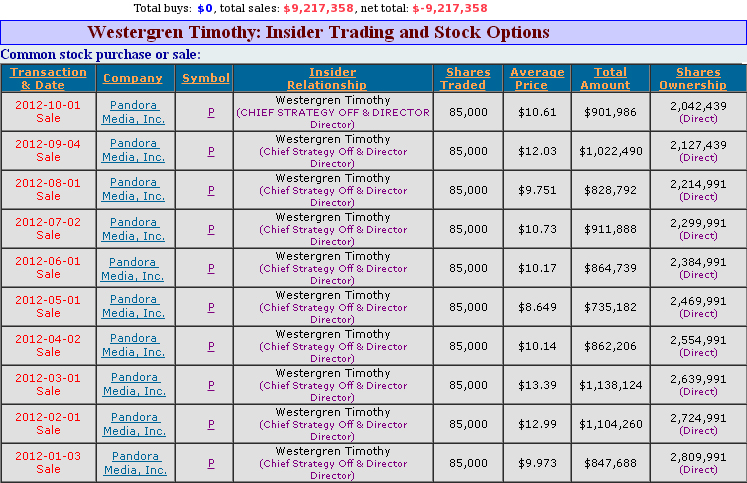 We talked to Tim Westergren, who pointed to a fairly routine practice.  “As is common for folks in my position I’ve filed to sale a minority of my position over the first couple years of being public (at which point I will have been at Pandora for over 14 years),” Westegren emailed Digital Music News.  “I will still hold the great majority of my position and remain very bullish on the company’s future.”

That is subject to debate.  One Wall Street insider noted that executives often hold shares if they truly anticipate an increase, though selling can also be smart diversification.  But Castle sees something far more duplicitous, especially since Westergren’s campaign to reform radio royalties comes ahead of a 2015 rate-setting adjustment.  That is considerable lead time, and according Castle, neatly fits a schedule designed to dump roughly $30 million in these shares over a two-year period, based on the pattern established so far.

That valuation is predicated on some level of stock price stability, which is hardly a given for Pandora.

“That means that as of this month, [Westergren] will have fully liquidated his position in 24 months if he continues selling 85,000 shares a month which seems to be the plan.  So by keeping Wall Street focused on the bright and shiny object of price fixing through the IRFA legislation, is he more or less likely to keep Pandora’s stock price propped up long enough to finish his exit?  And bank roughly $30 million?“