I’m a US Senator. And This Is Why I Support Lower Internet Radio Royalty Rates…

The following comes from Oregon Senator Ron Wyden during a speech at the Future of Music Coalition Summit in Washington, DC on Tuesday.  Wyden is a major backer of the Internet Radio Fairness Act, or IRFA, which aims to lower, or at least normalize, royalty rates for internet radio. 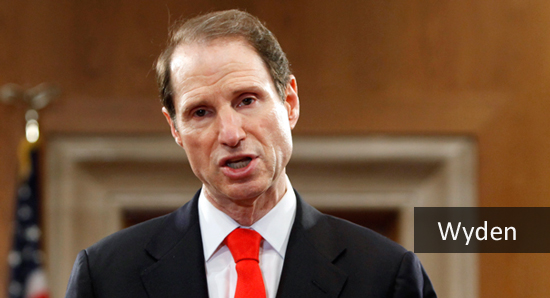 For much of the last half century, the music business has essentially been a vertically-integrated industry managed by a few big record companies.  These are the companies – these record companies – who in my view are using uncompetitive practices to crowd out the competition on radio and TV and record stores and elsewhere.

They are the people that made ‘payola’ a household word.

The result in my view is less artistic innovation, and fewer innovations that will be widely shared and consumed.  Now, if it weren’t for the disruptive independent record labels – I’m talking about people like I.R.S. and Sub Pop and Tim/Kerr – we might never have known much about bands like R.E.M., and Nirvana and the Replacements, who I just told you I don’t want to dedicate a lame duck session of Congress to, but I sure want us to remember their enduring influence on not just rock music, but on their contributions to our culture and an entire generation.

There are a lot of other change agents as well.  Sean Parker, who founded Napster, and the creators of YouTube.  I gather that you all heard from Tim Westegren earlier today, with Pandora.

So the history of American music is one of artistic creativity, technological advancement, and particularly those innovators – the dreamers – who are willing to disrupt the status quo.  And in my view, we’ve got to make sure that’s what the future is all about.  That kind of ongoing innovation, and in many instances, what is sure to be disruptive innovation.

Now, I’m not of the view that it’s my job on the floor of the United States Senate to figure out what the business models for music ought to look like.  But it is the job of policymakers to ensure that the law and public policy doesn’t favor one business model over another, and particularly that it doesn’t favor incumbents over insurgents.  We’ve got to make sure that the past doesn’t get a leg up on the future, and I think a lot of you remember that in these kinds of debates, it seems like the future doesn’t have a lobbyist.

A lot of blue suits, dark suits and ties for slicing up a fat hog, but there isn’t so much of a voice for the future.  And I think that’s what we want to remember when creating these policies.

And I want to take you for a moment down how I came to this sort of particular world view, because it tells you a little bit about how things change, and how it changes pretty fast.  I hear we got a lot of folks from Oregon here, raise your hands if you’re from Oregon.  1, 2… okay, the Oregonians are outside, they’re having coffee [laughter].

I came to the Senate in 1996… and it was clear with an election and dramatic changes, we were going to be looking at a variety of questions about the future of the economy.  And I made the judgment then that I was going to work my head off to strengthen Oregon’s traditional industries, particularly forest products and housing.  And in addition, I was going to help be part of an effort to lead our state into a whole new wave of technological opportunities, and put us in the forefront of innovation on the technological side.

And when I came to the Senate, the internet was something that not only were most Senators not up on, but something that most people had just started to hear about.  And there was an effort early on, much like today’s debates over PIPA and SOPA, where you have a laudable idea, in the case of PIPA and SOPA it was fight piracy, but the strategy for doing it (ie, unravelling the architecture of the internet) doesn’t make sense.

And when I came to the Senate, once again there was a laudable purpose — we didn’t want our kids, our small kids, to get access to all sorts of smut and porn and the like on the net — and back then, there was also an effort to take a step that was ill-advised, really as ill-advised as PIPA and SOPA was on piracy.  The idea was just to censor what was on the net.  And I and others said, ‘that just doesn’t make any sense, how are we going to encourage growth on the net if there’s secondary liability for example on the web for somebody that has a website because somebody posted something?’

So I was part of a coalition that passed a law that said you wouldn’t have that level of secondary liability.  It’s called section 230 of the Communications Decency Act.  And a lot of people believe that if we hadn’t passed that, and you could hold people liable for stuff that was posted on their sites, we probably wouldn’t have had people invest in the social media, and Twitter and Facebook and Google, because who wanted to be held liable for something that was posted on your site.

So, I began to adopt the kinds of principles then, of trying number one to make sure that government did no harm, and number two that government always tried to be on the side of innovation.  And that has been my bedrock set of principles throughout this kind of 15 year odyssey in technology policy.  It’s what led me to write the Internet Tax Freedom Bill, to protect communities and small business from discriminatory taxes on internet commerce, it’s what led me to write the Digital Signatures Law, so now you can sign things digitally instead of waiting for snail mail and all these other kinds of approaches.

So what we’re now faced with, once again, is trying to find approaches to make sure that the person without money and without clout, but with important contributions, can have the same ability as the deep-pocketed incumbent to be successful.  The internet is still the great equalizer, it’s exactly what I’d hoped it would be 15 years ago, and that’s why I believe that the future of music, the future of a music marketplace that promotes diversity of music choices and adequate compensation for artists, is best enabled by an open internet, and one that does not discriminate – does not discriminate – against the innovators.

That is a marketplace that does not exist today. Music is still dominated and controlled by a couple of multi-national corporations, who of course in effect act like a duopoly to maximize their profits, and not maximize the compensation of artists and not maximize musical choice.  My view is, the internet is capable of freeing artists from what really are these shackles almost of major record label middlemen, by enabling artists to broadcast themselves directly to the consumer.

Now unfortunately, as a result of the 1998 law championed by the incumbent record industry, internet radio has been constrained.  Royalty rates prescribed for internet radio – ultimately folks, that’s what our bill is all about, it has absolutely nothing to do with the First Amendment, this is a bill about royalty rates, folks.  That’s what the bill is about, royalty rates, and not discriminating against the innovators – Slacker, iHeartRadio, Pandora, there are lots of them – and so they don’t pay more and face discrimination from a process based on the determinations of a panel of copyright judges that make their own judgements about market rates.

But the reality is that there is no functioning market here, and the judges are left with not much information to make their decisions.  The current method that judges use to establish rates for internet radio has led to internet radio paying five times the royalties as other digital broadcasters like satellite and cable.  And I don’t understand the case for allowing that, so the bill I introduced on a bipartisan basis would treat internet radio in all cases just as you’d treat satellite and cable radio.  That is what the bill is all about.

You’ll hear the record labels oppose this legislation, spend lots of money saying – number one – Western civilization is going to

end if we have fairness in these rates.  And they’re going to offer all sorts of arguments for why royalty rate discrimination is okay.  I personally think that if the royalty rates are lower, the internet broadcasting market becomes larger, and that’s a strategy for creating more income for artists, and more music choices for consumers, and a broader array of music.  And that sounds to me like a worthy outcome.