If Only the World Hadn’t Ignored Lars Ulrich…

Metallica drummer Lars Ulrich stopped doing interviews like this a long time ago; he was simply burned too badly by the post-Napster backlash.  And more than twelve years later, artists are still frightened to take a stand like this, for fear of alienating fans.  But looking back at this interview with Charlie Rose, in the midst of Metallica’s war with Napster, it’s becoming obvious that several issues simply got buried. 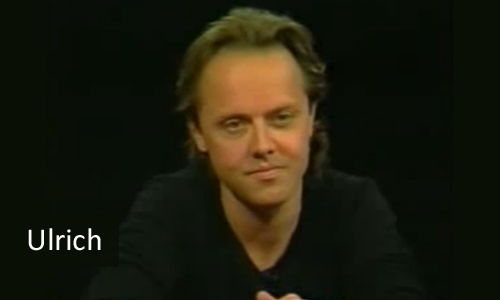 Charlie Rose: People will say that you’re trying to stop technology, and you can’t do that.

Lars Ulrich: No you cannot, and we’re aware of that.  So what we’re trying to do is be the first artist to basically set our foot down and say, ‘Wait a minute. Time-out for one second. Let’s just sit down, and deal with this,’ and try to get both a public debate going on how to control this for the future.

And, also on the legal front go after Napster and show to the other upstart companies that provide similar services that if you’re going to do this, you’ll have people like Metallica with deep pockets that are very tenacious and emotionally invested on your back all the time, and if that’s something you want to pursue basically.

Rose: You think this is the first step on a slippery slope —

Rose: — that will lead to the artist losing all control.

Ulrich: And not just musicians, all artists that create anything from scratch, absolutely.

…and later, addressing points by Chuck D, also being interviewed by Rose…

Most of what you’re saying deals with the record companies being these money-hungry, greedy blah, blah, blah.  Remember one thing: I can guarantee you, there is nobody at Napster that is doing this as a charitable event for all of mankind.  There are investors behind Napster, and there are people counting the days until Napster gets an IPO and everyone makes millions for their work.

I just think it’s ignorant to say that just because you take it away from the record business, and the record companies, and you hand it to these other people that are going to make it available in another way, that there’s not going to be the same profiteering from it.  That is ignorant.

Lars: But I’m not crying about the music business making money off me, because they invested in me.  Fred Durst sits there and says ‘I believe in Napster and want to go against the recording companies,’ well who paid for your ‘Nookie’ video?  Who paid the $600,000 so you could have your video played on MTV that made you sell 8 million [album] copies?  You didn’t pay for that yourself.