A Robot Conducts an Entire Orchestra In Front of 800 People 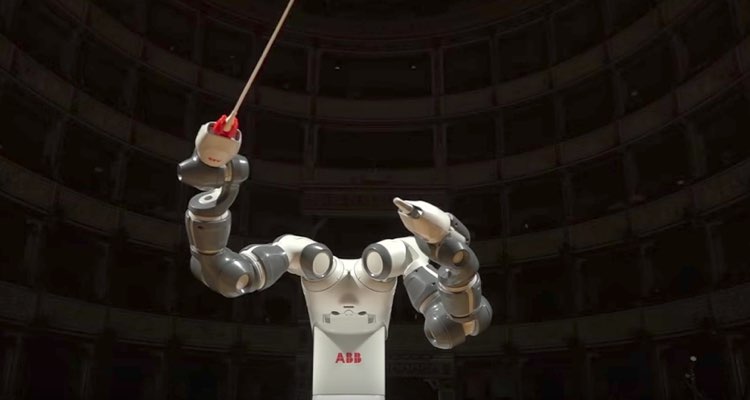 YuMi the Robot has conducted a human orchestra.  Should Dudamel be worried?

Swiss firm ABB designed the two-armed robot.  To mark the First International Festival of Robotics in Pisa, YuMi performed at the Verdi Theatre.

“We basically had to find time to understand his movements.  When we found the way, everything was pretty easy.”

To make sure that everything went off without a problem, technicians supervised the performance.  Everything went well, according to Colombini.  YuMi conducted three of the eighteen pieces performed that night, including ‘La Donna è Mobile’ from Verdi’s opera, Rigoletto.

“It is absolutely fantastic.  And the technicians were fantastic just to make everything perfect, especially in the length and in the speed of the gesture, which is very important.”

On ABB’s website, Colombini described how the company programmed the robot’s performance.

After they finished the recording session, Colombini praised the robot’s fluidity.

“The gestural nuances of a conductor have been fully reproduced at a level that was previously unthinkable to me.  But we did it:  YuMi achieves a very high level of fluidity of gesture, with an incredible softness of touch and expressive nuancing.  This is an incredible step forward from the rigidity of previous robots.”

Although the robot performed well Tuesday evening, using a robot conductor has some drawbacks.  YuMi can’t improvise.  Any unexpected change in tempo would have thrown off the robot’s programming.

Colombini explained that while the robot has a great technique, you can’t program human sensitivity.

“Of course, YuMi is good when it comes to technique… but the soul, the spirit, always come from a human.  I imagine the robot could serve as an aid, perhaps to execute, in the absence of a conductor, the first rehearsal, before the director steps in to make the adjustments that result in the material and artistic interpretation of a work of music.”

You can watch Yumi’s performance below.