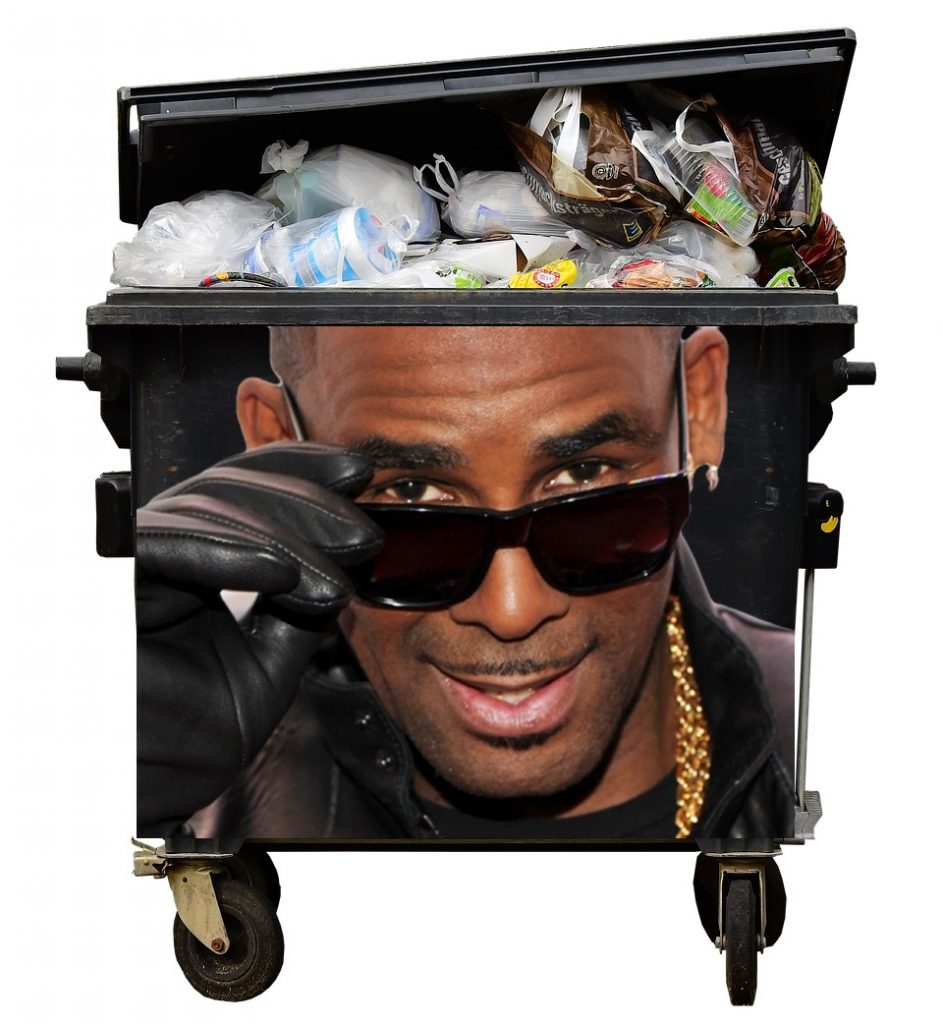 Against a very competitive field, Time’s Up has named R. Kelly the music industry’s biggest piece of male garbage.  Now, they want the industry to do something about it.

Forget sexual harassment.  R&B singer R. Kelly has been accused sexual misconduct, statutory rape, aggravated assault, and harassment by a number of women.  And reports surrounding his sexual misconducts started as early as 2000.

And those were just the humble beginnings.  Jim DeRogatis of the Chicago Sun-Times first accused of singer of statutory rape with girls as young as 15.  Last year, DeRogatis published another report in BuzzFeed, accusing Kelly of holding very young women against their will in a ‘cult’.  The sexual slavery featured R. Kelly deciding things like what his slaves wore and when they went to the bathroom.

In a BBC documentary, R. Kelly’s ex-girlfriend Kitti Jones alleged that she was “groomed by him, and forced to have sex with him and others at least 10 times in a ‘sex dungeon'”. She continued,

“I was introduced to one of the girls, that he told me he ‘trained’ her since she was 14, those were his words.  I saw that she was dressed like me, that she was saying the things I’d say and her mannerisms were like mine.  That’s when it clicked in my head that he had been grooming me to become one of his pets.  He calls them his pets.”

Of course, other allegations have also surfaced.  But somehow, Kelly’s singing career is still going strong.  In fact, he’s crushing it.

Now, the Women of Color of Time’s Up have had enough – and they’re asking the music industry to severe ties with R. Kelly.

The Women of Color of Time’s Up, a subcommittee of the larger group. is specifically organizing around issues that affect women and girls of color.  And they’ve identified R. Kelly as the worst of the worst.

Here’s a statement released by the group:

“We insist on a world in which women of all kinds can pursue their dreams free from sexual assault, abuse, and predatory behavior.  As Women of Color within Time’s Up, we recognize that we have a responsibility to help right this wrong.  We intend to shine a bright light on our WOC sisters in need.  It is our hope that we will never feel ignored or silenced ever again.”

Of course, neither are likely to happen.  Whether that spells the end of R. Kelly’s career is doubtful.  Indeed, R. Kelly is better at bouncing back from heinous sexual assault and abuse charges than Chris Brown.  It’s almost as if all of this helps R. Kelly’s career.