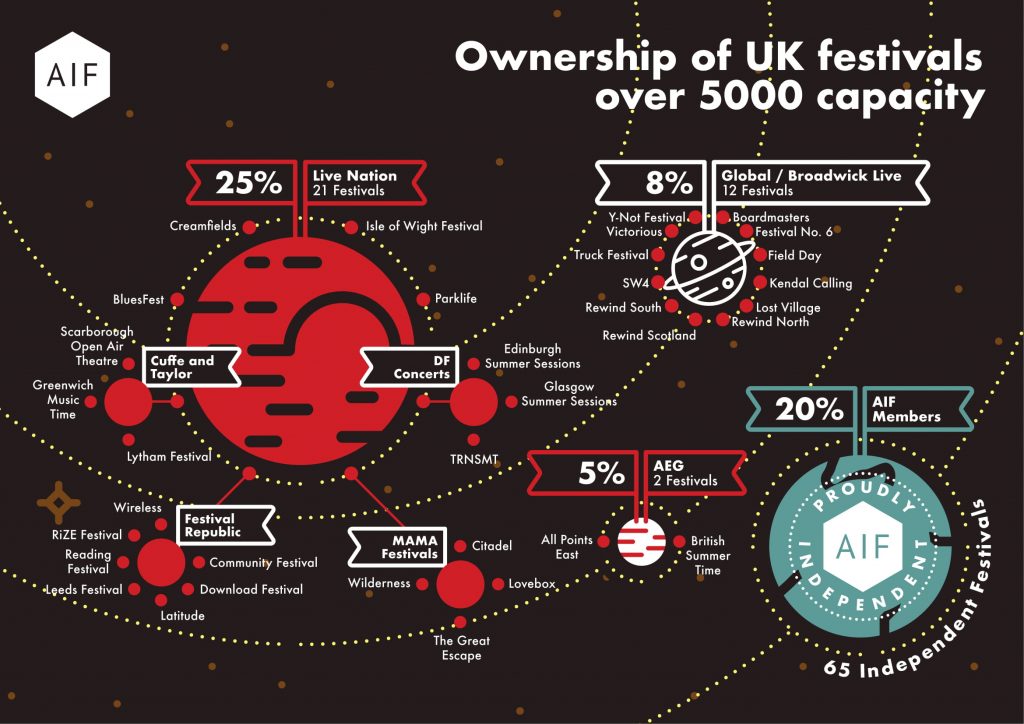 According to a new report released by the Association of Independent Festivals (AIF), Live Nation now controls more than a quarter of all British festivals a 5,000-plus person capacity.

The group published the infographic above showcasing just how quickly Live Nation is gobbling up the sector bit by bit.

The Association of Independent Festivals is concerned that the American conglomerate is seeking to stamp out the competition.  The next largest competitor is Global and promoter Broadwick Live, which controls around 8% of festivals with more than a 5,000 person capacity.

AEG holds around 5% of the market with just two festivals under its umbrella, All Points East and British Summer Time.

Overall, the Association of Independent Festivals says its members represent about 20% of the 5,000+ market with 65 festivals and 37 companies that make up its ranks.

AIF is hoping to get UK authorities to scrutinize Live Nation’s dominance in the live festival industry a little more closely.

AIF worries that Live Nation will replicate its subsidiary Ticketmaster’s 2success as a box office service within the British live festival industry.  Ticketmaster is the world’s largest ticketing company and controls 46% of the top venue box offices in the UK.

But whether Live Nation’s presence is harmful is worth debating.  The Association says that allowing a single company to dominate festivals reduces the amount of choice available to music fans.  But it remains unclear whether British fans are being deprived, or even shortchanged on price in the current market.

In terms of market share dynamics, it’s also unclear if a 25% share of bigger festivals is unfairly competitive.  Of course, that leaves 75% for competitors, and that’s only counting bigger events with 5,000-plus attendees.  A deeper investigation by regulators could also reveal advantages for fans and artists, with splashier events and better paydays one possible result of Live Nation’s presence.

Of course, AIF sees this as anti-competitive encroachment, and are hoping to reverse the trend.  To help combat this and educate the public about the importance of individual festivals, AIF has launched a ‘stamp of independence’ for its members to celebrate their freedom and encourage fans to support an independent festival.