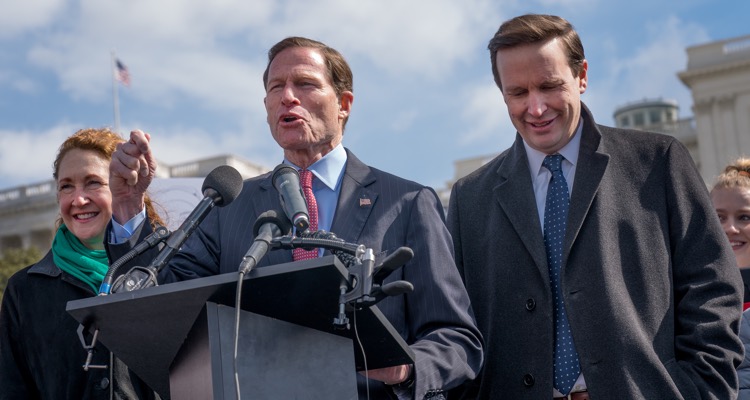 After an explosive investigative report from CBC and the Toronto Star revealed Ticketmaster had its own in-house program for helping scalpers sell tickets, two U.S. Senators are seeking answers.

Richard Blumenthal (D-CT) and Jerry Moran (R-KS) have written a letter to Rapino — and it’s not an invite to play golf.  The air are flatly asking about the ugly allegations contained in the CBC’s investigative report.  The letter asks Rapino to respond to the inquest by October 5th.

There’s a reason the Senators drafted the demand.  Both Moran and Blumenthal sponsored the BOTS Act, which is designed to limit the use of bots in ticket-purchasing.  Scalpers are often accused of using bots to mass-buy tickets to resell them on TradeDesk and other platforms.

Sounds like smart business — ethical issues be damned.  But Ticketmaster CEO Jared Smith has denied the allegations and says the company has “never had any program or product that helps professional resellers gain an advantage to buy tickets ahead of fans.”

Ticketmaster was purchased by Live Nation in 2010.  And after Smith’s non-answer to the allegations, Senators are seeking answers from Live Nation itself.

Here’s a peek at the full letter.

CBC News reported on September 19th that Ticketmaster, the live-event ticket sales and distribution subsidiary of Live Nation Entertainment, recruits and employs professional ticket scalpers to circumvent the ticket purchasing limits on its own primary ticket sales platform in an effort to expand its ticket resale division.[1] According to the article, Ticketmaster utilizes a professional reseller program called TradeDesk, which provides a web-based inventory for scalpers to effectively purchase large quantities of tickets from Ticketmaster’s primary ticket sales website and resell these tickets for higher prices on its own resale platform. Citing examples of TradeDesk users moving up to several million tickets per year, the allegations of the harms to consumers made in this piece are serious and deserve immediate attention.

Given our ongoing interest in protecting consumers from unfair and deceptive practices, we seek clarification on the use of this program. The enacted Better Online Ticket Sales (BOTS) Act of 2016 prohibits the “circumvention of a security measure, access control system, or other technological control or measure on an Internet website or online service that is used by the ticket issuer to enforce posted event ticket purchasing limits or to maintain the integrity of posted online ticket purchasing order rule.”[2] Please provide responses to the following questions:

Describe the event ticket purchasing limits that Ticketmaster currently employs for sales on its primary ticket sales platform. Additionally, how does the company identify computer programs used to circumvent these purchasing limits?

Do Ticketmaster’s ticket purchasing limits and associated detection practices apply to users of its online program, TradeDesk? If not, please explain.

What are the specific rules and processes of compliance for participating TradeDesk users as it relates to ticket purchasing limits and other relevant consumer protection priorities? Please share any documents and guidance materials that are provided to TradeDesk users.

What role does Ticketmaster’s Professional Reseller Handbook play in deterring its resellers from engaging in illegal ticket purchasing activities?

Please provide your written response as soon as possible, but no later than 5 p.m. on October 5, 2018. Thank you for your prompt attention to this important matter.