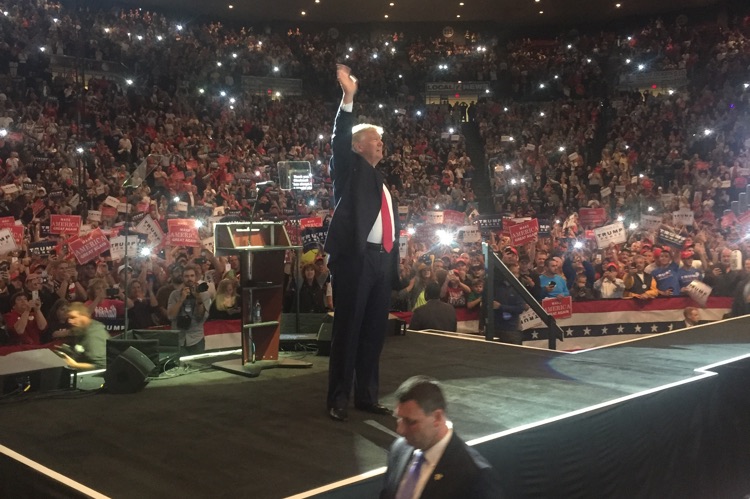 Rihanna is the latest artist to send a cease-and-desist letter to President Trump for playing her music at one of his rallies.

The letter from Rihanna’s legal team says that the singer isn’t authorizing her music to be played at Trump rallies.

The letter was sent after journalists describing the atmosphere of a recent rally brought attention to the music playing in the background.  Philip Rucker specifically mentions Rihanna’s song playing while aides “toss free Trump t-shirts into the crowd like a ball game.”

Not for much longer…me nor my people would ever be at or around one of those tragic rallies, so thanks for the heads up philip! https://t.co/dRgRi06GrJ

Rihanna is the latest in a long string of artists protesting Trump’s use of their music at rallies.  Just recently, Guns n’ Roses frontman Axl Rose demanded that his music be banned at Trump events.  Others, including Aerosmith, have also sent legal letters.

Despite the cease-and-desist letters and protests, there may be little legal recourse these artists can take against Trump.

In most situations, politicians are covered by blanket performance licenses, with the venue securing the necessary agreements with the American Society of Composers, Authors and Publishers (ASCAP), Broadcast Music Inc. (BMI), and others.  ASCAP and BMI, easily the largest PROs in the U.S., currently administer public performance licenses for more than 23.5 million songs.

Most (if not all) convention centers that host political rallies already have blanket licenses for songs.  And for the most part, that seems to cover widespread use of music.  Axl Rose of Guns N’ Roses mentioned this arrangement on Twitter saying, “Unfortunately the Trump campaign is using loopholes in various venues’ blanket performance licenses which were not intended for such craven political purposes, without the songwriters’ consent.”

Apparently in response to previous issues, both ASCAP and BMI have created a special license for political entities, allowing musicians to opt out of their songs appearing at rallies.

Some artists have taken advantage of these provisions to prevent songs from appearing at political rallies.  In 2015, Steven Tyler demanded that Trump stop playing “Dream On” at his rallies.  BMI removed public performance rights to the song to comply with Tyler’s wishes.  After the RNC used “We Are The Champions” in 2016, Queen also excluded the song from future political events.

Regardless of those moves, it’s not clear if the political exclusion has any teeth.  So far, it looks like a weak (and largely obscure) provision.

The ASCAP guidelines also state that politicians should seek permission from artists even if they have obtained a license to use the song.

The guidelines also state that disgruntled artists could file a suit under the Lanham Act, which prevents trademark dilution. That method of reprisal is untested so far in court, though Trump’s repeated issues with major recording artists could prompt a legal challenge.