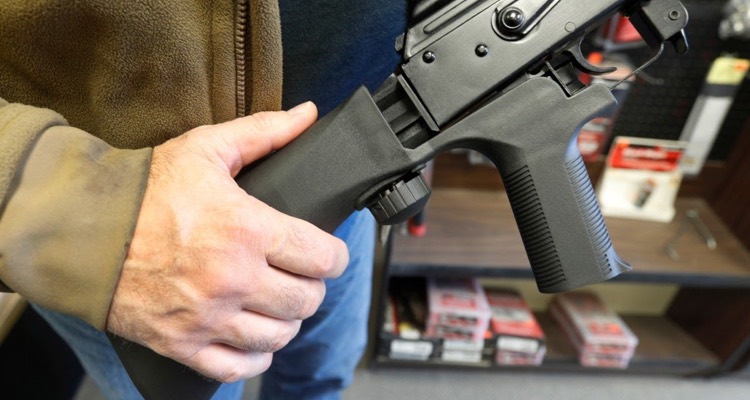 A year and a handful of months after the 2017 Las Vegas shooting, the government is finally banning bump stocks.

The U.S. Department of Justice has now declared that any weapons modified with a bump stock will be classified as machine guns.  The classification means that the modified guns will only be available to law enforcement officers.

Owners who have weapons with a bump stock will have 90 days to destroy them or turn them over to the Bureau of Alcohol, Tobacco, Firearms, and Explosives.  The move represents an unexpected step towards gun control from the Trump Administration.

The DOJ’s banning of bump stocks is a direct response to the tragic Las Vegas mass shooting.

In October of 2017, 58 people were killed by a lone gunman who fired rifles using bump stocks into the crowded Route 91 country music festival.

The Justice Department says it revisited the classification of these bump stocks “because such devices allow a shooter of a semiautomatic firearm to initiate a continuous firing cycle with a single pull of the trigger.”

After the announcement, three guns rights groups and a bump-stock owner announced a lawsuit against the government to stop the new regulation from going into effect.

Back in 2010, the ATF refused to classify bump stocks as a machine gun because the trigger of the gun is not permanently altered.

The Las Vegas attack is the deadliest mass shooting in United States history, and the only one in which the gunman used bump stock modifications. Law enforcement officials have worried that a copycat gunman may attempt to “outdo” the Las Vegas gunman using a similar device.

A lawyer representing two plaintiffs who sued the government says, “they are actively attempting to make felons out of people who […] lawfully acquire and possess these devices.”

The National Rifle Association has not commented on the Trump administration’s new ban.  Previously, the guns rights group urged the administration to restrict the sale of bump stocks rather than banning them outright.