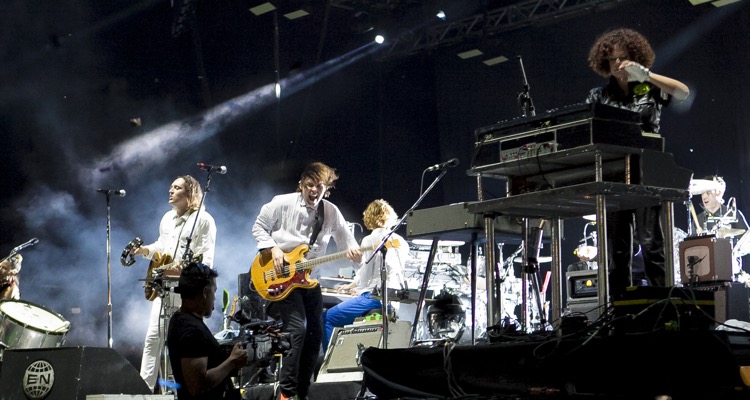 More than 200 Canadian musicians have banded together in support of indigenous protestors.

Arcade Fire is the latest band to show support for an anti-pipeline protest.  The group is signing a strongly-worded open letter alongside other Canadian groups like Destroyer, Tokyo Police Club, US Girls, Pup, and Godspeed You! Black Emperor.

A group of indigenous people were arrested earlier this month for defending land belonging to the Wet’suwet’en Nation. Those detained were protesting the Coastal GasLink pipeline, which is slated to run through the area.  In total, the GasLink will run more than 400 miles.

Royal Canadian Mounted Police broke up the confrontation at gunpoint.

The letter addresses this point directly, with many musicians showing their solidarity with those who were arrested.

“Many of us grew up in Canada as uninvited guests, misinformed about Canadian history and the settler-colonial project of expansion. It’s 2019, and we refuse a willful ignorance, and take seriously the responsibility dealt with all Canadians by the Truth and Reconciliation Commission to learn about Canada’s legacy of colonial violence.

We recognize the pattern of the RCMP’s role in expanding Canadian influence over Indigenous peoples’ lands for resource extraction. We are horrified by the violence of last week and the RCMP’s continued harassment of your people, and troubled by the exclusion zones erected to keep the press from reporting and Wet’suwet’en citizens from returning to their homes.”

The letter also praises the government of the Wet’suwet’en people.

“Your hereditary government is showing more leadership in climate action than Canadian elected officials. For that strength and commitment, we are grateful.”

You can see the full letter published here.

Arcade Fire recently wrapped up their ‘Everything Now’ tour last September and have been quiet since then. Their previous record was released in July of 2017.

With hundreds of artists now supporting the indigenous peoples of Canada, the government is now facing increasing pressure to address climate change.  But it’s unclear if powerful oil interests, which form a major part of the country’s economy, can be forced to alter the pipeline project.

The musicians, along with a growing group of protesters, aims to influence policy toward supporting alternatives to fossil fuels.