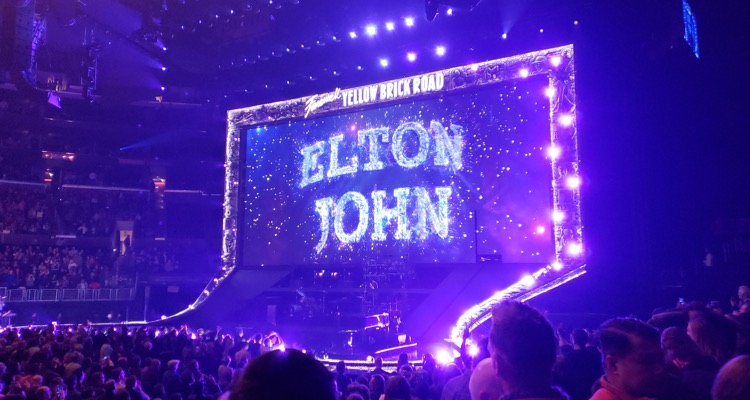 Music can be an incredibly powerful factor in our emotional wellbeing.

Artists who truly are passionate in creating and performing music possess a unique ability to impact the lives of their audience. A great performer can provide a unique form of escapism that can alleviate the struggles of daily life.

There are artists who take their performance to another level. Todd Rundgren, for example, had a thematic costume change between nearly every song in the 40th anniversary tour for A Wizard, A True Star. Some artists hit that next level through their pure showmanship; forming a parasocial bond with their audience. Elton John fits into the latter category perfectly.

Stress, meanwhile, has the opposite effect. It can make doing otherwise enjoyable things more difficult because it can be hard to pull yourself out of stress.

On Tuesday, January 22nd, I was getting stressed out. I was in a rush to get to the concert on time.

Once on the train, I saw that one of my favorite writers had released a new article so I read it. It was bad timing. The article, while brilliant, was massively depressing. Here is how it starts:

“The issue before us is death. Not only our individual death, which is more imminent for some of us this morning than others, but our collective death. We have begun the sixth great mass extinction, driven by our 150-year binge on fossil fuel.”

That was when my small spiral of minor annoyances converged with the greater fears we all possess. I then noticed that it was 7:45 and the show was set to start at 8pm. I was still at least 25 minutes away. While it may be cliche, I really did not want to miss getting to witness Elton John perform any staples like “Tiny Dancer”.

The events of the previous hour left me feeling anxious and overwhelmed. I bring all of this up is because I think it’s important to convey my mentality when arriving at The Staples Center and how Elton John was able to impact me.

Upon arrival, I could hear the end of “I Guess That’s Why They Call It The Blues” and was finding my seat during “Border Song”

After we sat down and I could see Elton John, a wave of happiness hit me. I was there! Getting to see one of music’s most important, influential and legendary creators in modern history. “Border Song” wrapped to a close and he gestured in praise of the audience.

Then I heard the intro of “Tiny Dancer”.

I struggle to think of the words to try represent the waves of positivity I felt emanating from Elton John. Here is a man who truly loves what he does. You could feel how much energy he drew from the crowd, how much he appreciated every person that was there, singing along.

Within moments, I had forgotten about the stresses of the day. I was lost in my feeling of joy and admiration and thankful to be in the presence of a true luminary.

Elton’s piano was on a platform that moved from side to side on the stage. At first, I hadn’t noticed because it moves slowly, but it’s cool and I feel that it perfectly represents his stage presence. Meaning that Elton wanted to be closer to everyone in attendance so that it didn’t matter where you sat, you got to experience that. This is, of course presumptuous of me, but that is the attitude that seemed to emanate throughout the performance.

As the show moved on through “Rocket Man” the audience joyously sang along. Elton would occasionally share in between songs and discuss how he and Bernie Taupin had worked together, really describing the ins and outs of their early days. Their desire to be heard by the world. One of the deeper moments of this was in the lead up to “Someone Saved My Life Tonight” when Elton described how he had hit his rock bottom and how that song was somewhat of a respite. To balance that, we had some more fun with “Levon” before things got a bit more somber with “Candle In The Wind”. He chose to do the Marilyn Monroe version as opposed to the Princess Diana version.

A Funeral For My Negativity

And then, the stage went black. The stage lights were off, all you could hear was the audience. Then there were weather sound affects. Wind, then thunder and lightning (with accompaniment of flashing stage lights) followed by more quiet and the light hum of a synthesizer.  I noticed the faint silhouette of a heavy amount of machine smoke swelling around the stage as the sound got louder. I knew what was coming. My favorite Elton John song that I knew was on the setlist  “I didn’t expect him to play Grey Seal or Empty Sky”, was starting. The synthesizer roared forward as the lights suddenly filled the stage with color. It was time for “Funeral For A Friend/Love Lies Bleeding”.

After the piano section of the intro and the pace was about to pickup, the percussive BANG that signifies the song’s transition was so powerful that I could feel it. It was one of my most exciting experiences of recent live music memory. Once the rhythm picked up, I did notice a moment or two where it felt that maybe one of three percussionists was off beat, but it was a short lived phenomenon. The song roared forward! Elton bellowed out in the chorus and he was really giving it his all. I doubt that the performance could have been any better.

I feel that it was brave how he chose to do it. He specifically called out how the disease is treatable, this is something we can work towards eliminating. It’s stigma that perpetuates this horrible disease. He even pointed out that, in America, the highest density of the disease is in the deep south. Religious fundamentalists and their persecution of homosexuality is something we need to remain aware of and actively combat in our society. Coming out of that speech, I truly felt like this was something Elton had genuine passion about. 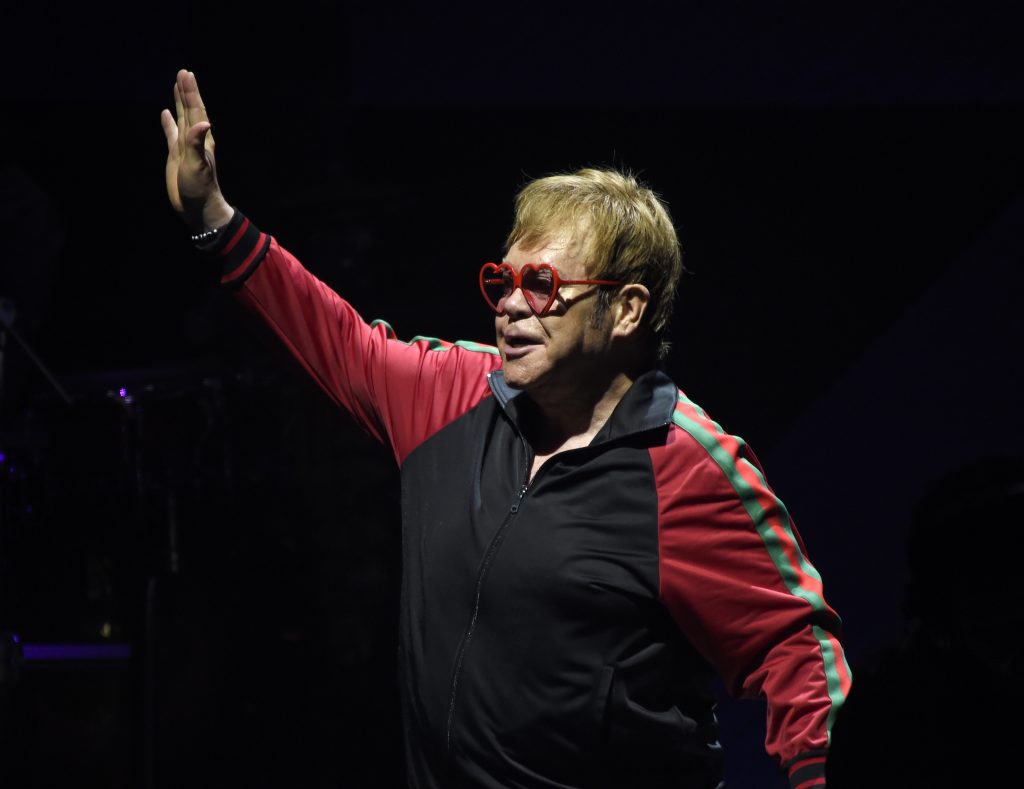 The show moved onto “Burn Down The Mission”. I want to mention how great the digital projectors and entire stage set up was at Staples Center. I was somewhat taken aback by how great the projectors were. The depth of the color and brightness made the backdrops mistakable for giant screens. 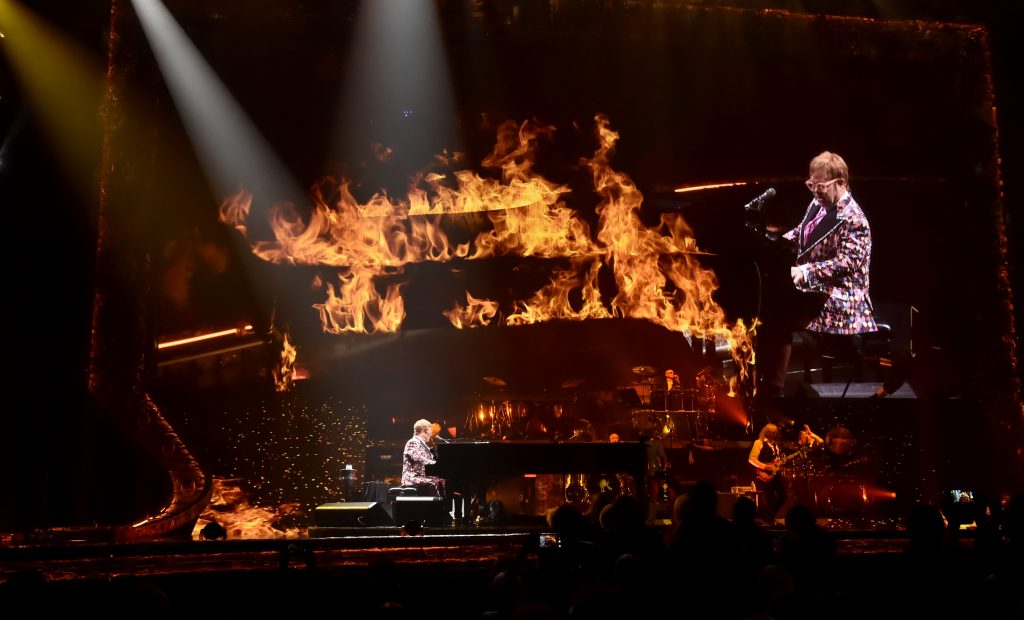 The show got a bit more slow and reflective with songs like “Daniel” and “Sad Songs”, it was kind of nice to have a break. I feel that it was a nice breather between more intense moments of the performance.

It was then time to culminate in the climax of the event with a slew of more fast paced, exciting songs like “The Bitch Is Back” with video accompaniment of people in drag attending a swanky mansion/pool party.  You had standards like “I’m Still Standing” and the obligatory “Crocodile Rock”. The real high point came with “Saturday Night’s Alright For Fighting” with video of various fight scenes from across cinema history. Including one of Elton delivering a high kick to someones face from the “Kingsman” movie.

That concluded the ‘regular’ show but I think, at this point, encores are an expected part of live performances of this caliber. Elton returned and performed “Your Song” followed by “Goodbye Yellow Brick Road”. It was emotional for many in the audience and for Elton. A video montage played of various parts of his career. Despite only having been alive for part of it, I still felt a sense of nostalgia and reminiscence.

The backdrop showed an image of Elton on stilts wearing ridiculously oversized boots. That had me remembering the first time I watched the film Tommy, sitting on the floor  in my grandmothers basement and saw Elton perform as the Pinball Wizard. It was deeply emotional and touching. After the song, Elton brushed away a tear and said “I will miss you but I will remember you because you are in my soul” and I believed him. Despite this being just another show in a multi-year farewell tour, he put all of his effort into each song. He shared his genuine emotion with us, the audience.

He exited the stage on a conveyer belt that took him into a trap door on the side of the projector screen. The cameras, which had also zoomed around and showed the audience like at a sports event, was centered in on the back of his jacket, showing it on the big screen. 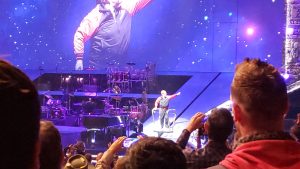 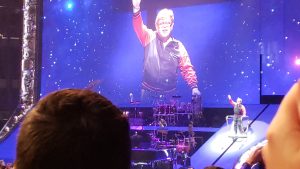 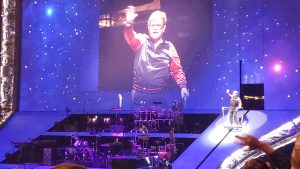 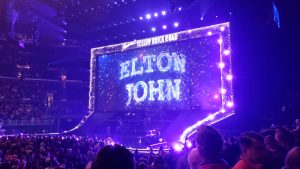 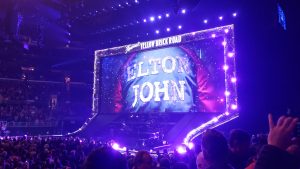 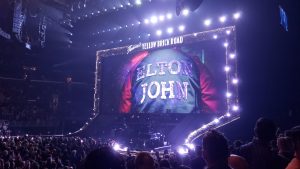 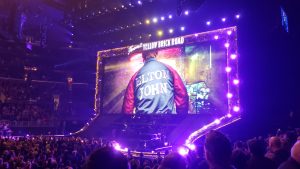 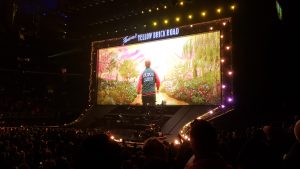 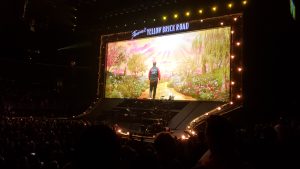 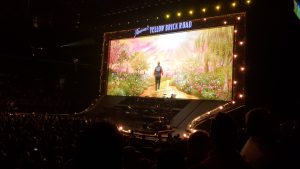 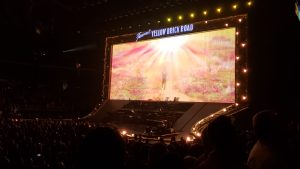 The camera then stayed stationary as a prerecorded image of Elton walking into the distance was on the screen. Slowly, the background he was walking in to morphed into the album cover “Goodbye Yellow Brick Road”, and then it was over.

In the course of a few hours, one man was able to transform the attitude of myself, and countless other members of the audience who had been experiencing the stresses of modern living. It is performers like Elton John who can seemingly extend your life by blanketing you in pure positivity.

It is so easy to get caught up in the daily struggles of life and start feeling overwhelmed by stress, fear, concern for our individual and collective future, etc. But the collection of moments I experienced at this concert will forever be something I can hold on to, to remind myself that there can be beacons of positivity in the world. You just have to listen to their songs.

It was an amazing night and I cannot thank the team behind Elton John enough for the production and for allowing us to attend. A special thank you to Imani Troy and Jessica Sciacchitano for the outstanding seats and for being a pleasure to work with!