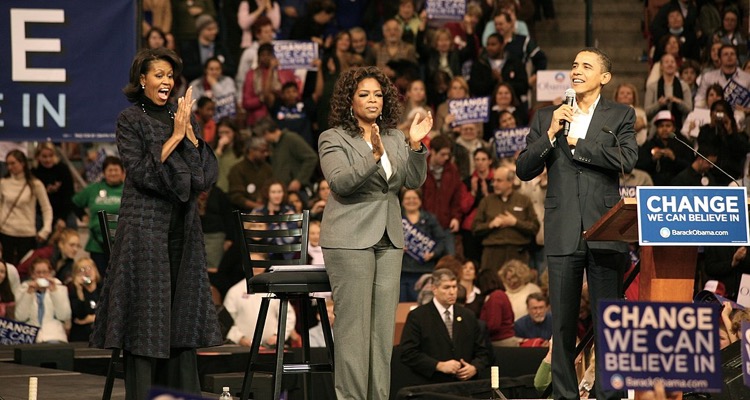 The Obamas on the campaign trail with Oprah Winfrey, 2007. All three are now podcasters (photo: vargas2040 CC SA 2.0)

After spending hundreds of millions on podcast acquisitions, Spotify is focusing more on the content itself.

The exclusive podcasting deal, confirmed to Digital Music News this morning, will feature ongoing contributions from both Barack and Michelle Obama.  The deal is being structured with the Obama’s organization, Higher Ground, specifically through its subdivision, Higher Ground Audio.

Exactly how frequently the pair will appear on the upcoming podcasting channel (or channels) is unknown.  At this stage, the former presidential couple is promising to produce and appear in numerous podcast episodes.  That could take any number of forms, including interviews by the ex-president himself, or shows featuring Obama-selected hosts and curators.

Of course, podcasting has blossomed far beyond question-and-answer interviewing, and the Obamas have a broad palette from which to operate.  So let’s see what’s in the offing.

Already, Higher Ground has inked a content deal with Netflix, with multiple productions underway.  That includes adaptations of Michael Lewis’ The Fifth Risk and David W. Blight’s Frederick Douglass: Prophet of Freedom.  The latter won the 2019 Pulitzer Prize for History.

“We’ve always believed in the value of entertaining, thought-provoking conversation,” Barack Obama stated.  “It helps us build connections with each other and open ourselves up to new ideas.

“We’re excited about Higher Ground Audio because podcasts offer an extraordinary opportunity to foster productive dialogue, make people smile and make people think, and, hopefully, bring us all a little closer together.”

The deal is a serious coup for Spotify, which is aggressively diversifying away from music.

Of course, Spotify is synonymous with music, specifically app-based streaming music and playlists.  That opened the door to a multi-billion dollar Wall Street offering and more than 100 million paying subscribers, though the company has been hampered by the high cost of royalties and endless negotiations to keep music content on its platform.

Podcasting, by contrast, is typically free and user-generated, with major upside in the form of advertising and added subscription value.  Of course, the deal with the Obamas was probably pricey, though its net effect on the broader Spotify podcasting ecosystem is likely to be immense.

Earlier this year, Spotify dropped nearly $350 million to acquire two podcasting companies: Gimlet Media and Anchor.  Both companies have been successful in different facets of podcasting production.  Spotify has indicated that it plans to spend hundreds of millions more to beef its podcasting suite.