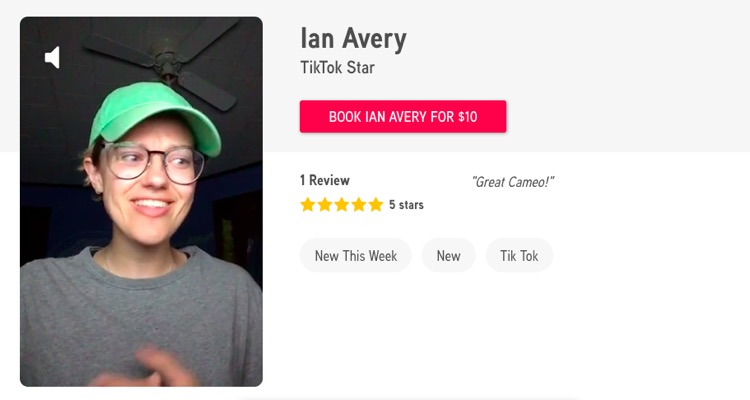 Cameo, a Chicago-based startup that allows users to purchase video messages from prominent actors, athletes, celebrities, and musicians, just received a whopping $50 million in series B funding from Kleiner Perkins.

Cameo, which was founded by Martin Blencowe, Steven Galanis, and Devon Townshend, now has over $65 million in capital and is valued at somewhere in the ballpark of $300 million. Several celebrities, including Snoop Dogg, have also invested in the company, and others celebrity investors are actively being courted — partially because their presence on the platform will prove so valuable.

Cameo’s founders indicated that these newest funds will be used to optimize the company’s mobile application — at the time of writing, customers must visit Cameo’s website to purchase content, which makes the brand’s success even more impressive. The company also intends to explore the possibilities of the international marketplace.

Cameo offers custom-recorded videos from 15,000+ individuals, including Snoop Dogg, Ice T, Sean Kingston, and Rebecca Black. The cost of a video ranges from five dollars to $3,000, and Cameo has stated that an average of 2,000 orders are placed per day. Cameo collects a flat fee of 25 percent from each transaction.

High-priced videos, including those offered by Snoop Dogg, seem to be relatively popular; Snoop’s profile boasts more than 75 reviews. If Cameo users are so inclined, they can make their videos available on the provider’s page; a multitude of Snoop Dogg’s past messages can be viewed through his profile.

A major expansion in musical talent could be next. In fact, a successful Cameo expansion could mean extra revenue for a vast number of artists, particularly those with younger audiences eager to make a connection.  Case in point: TikTok stars like Ian Avery (pictured above) and budding musicians (from any platform) can use Cameo to conduct direct outreach to fans and immediately monetize the connection.

Or at least, that’s the proposed business model.