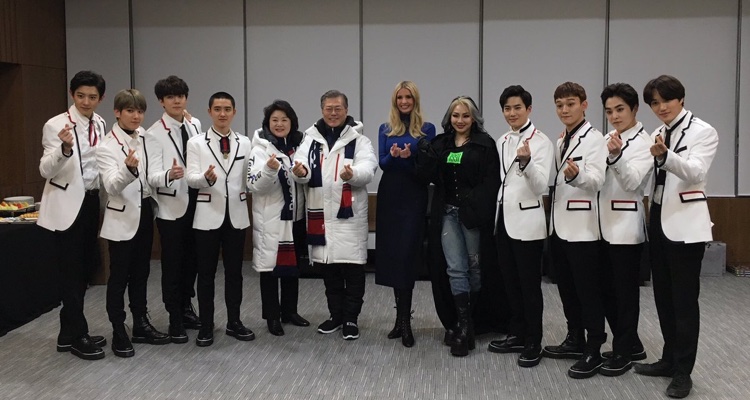 No Strangers to Politics: Members of EXO with South Korean president Moon Jae-in, Ivanka Trump and CL at the 2018 Winter Olympics

Several prominent Chinese pop stars, including EXO, Lay Zhang, Jackson Wang, and Victoria Song, have voiced their support for the Chinese government amidst the rising tensions in Hong Kong.

These C-pop singers uploaded pictures of the Chinese flag to their personal websites and posted statements affirming the One-China Policy, which holds that just one Chinese state, led by Beijing, exists, and that autonomous entities in and around China, like Hong Kong, Taiwan, and Macau, should one day be governed by China’s Communist Party.

The announcements came at an especially precarious moment, as protesters in Hong Kong have been clashing with local police, and a showdown with Beijing military officials seems possible. In an effort to avoid an internationally damaging tragedy like that of Tiananmen Square, the Chinese government has worked to discredit Hong Kong protesters with propaganda.

The listed musicians are just some of the latest Chinese voices to speak out in favor of Beijing. Business owners, public figures, and other well-known persons have been persuaded to shed a positive light on Beijing and a negative light on Hong Kong.

Hong Kong is a former British colony, and it was returned to China about two decades ago.  Correctly realizing that Hong Kong was dramatically different from China proper, Beijing officials allowed the area to continue to operate independently, provided that it was considered to be part of China.

Although Hong Kong features elected officials, free-market economic policies, and civil liberties that China lacks, it is still grouped together with China on maps and officially part of the country.

It seems that the listed Chinese pop stars — and others who would suffer financially from losing the lucrative Chinese market—have made their statements for commercial purposes.

In a testament to the reach of Beijing, Top Gun 2 executives recently changed the main character’s jacket to meet Communist Party preferences. The ability to conduct business in China is worth billions.

The China-Hong Kong showdown is complex and multifaceted, and it’ll be interesting to see how the situation plays out—and how the indicated C-Pop stars are affected by their pro-China stances.