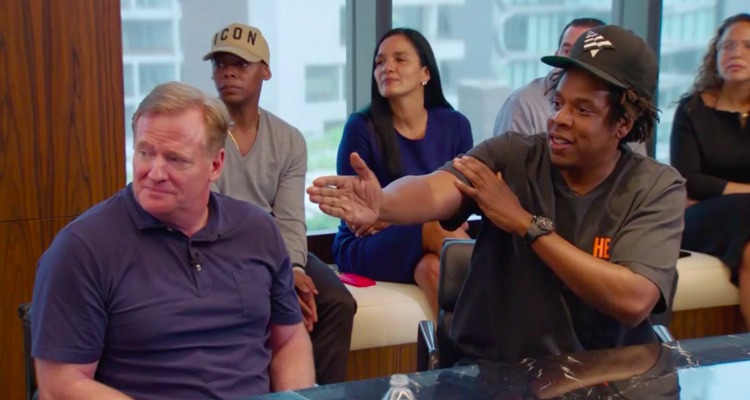 Earlier, Jay-Z declared it was time to “get past kneeling” and focus on solutions.

The partnership between Jay-Z’s Roc Nation and the NFL has drawn plenty of controversy, from many different directions.

That included an attack from Colin Kaepernick, alongside scores of critics who blamed Jay-Z for siding with the enemy.
This could cause some to reconsider that position. Just this morning. the Roc Nation+NFL alliance announced that it would be donating $400,000 to two charitable organizations in Chicago that are helping empower at-risk young people.

The donations are being made through the NFL’s “Inspire Change” program with Roc Nation, which hopes to combine entertainment and social justice initiatives.  The donations will be given to the Crusher’s Club and the Better Boys Foundation (BFF) Family Services. In addition to the money, Meek Mill and Rapsody, along with Meghan Trainer and Vic Mensa, will be visiting the two organizations sometime this week and talking with those the organizations help.

The Crusher’s Club helps children in Chicago both improve their own neighborhoods and “restore their lives” while BFF Family Services provides a variety of youth services and health programs to hundreds of families in Chicago. They also provide various education and employment services.

The NFL and Roc Nation hope to bring change to every city in the league during this year’s football season, and the two see the Chicago organizations as a blueprint for how Inspire Change will work.

Reportedly, Roc Nation both vetted and selected the two Chicago organizations that will be receiving the donations.

As part of the partnership between the NFL and Roc Nation, the latter will be co-producers of the halftime show at the upcoming Super Bowl. The partnership also gives Roc Nation the ability to choose who performs at various NFL events during the season.

The first of these events was the NFL Kickoff Experience concert, which took place on September 5th just prior to the opening game of the NFL season between the Chicago Bears and the Green Bay Packers.  Meek Mill, Rapsody and Meghan Trainer all performed at Chicago’s Grant Park before the game, which was free to attend.