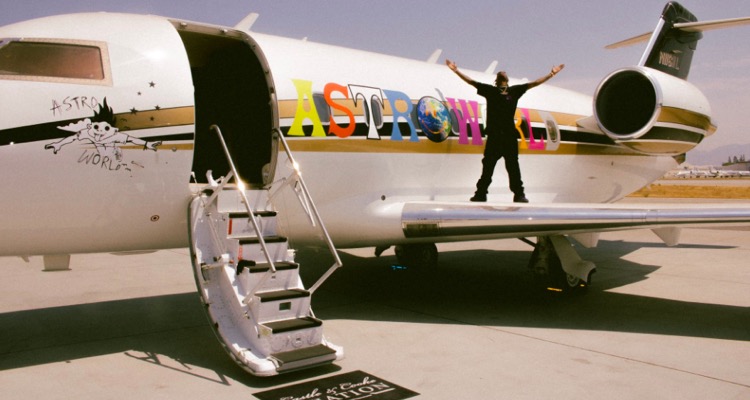 Travis Scott adorns the wing of his AstroWorld jet.

Rappers Travis Scott and DJ Paul settled a $20 million lawsuit filed by Paul, who insisted that Scott’s “No Bystanders” song was similar to “Tear Da Club Up,” which he recorded back in 1997 as a member of Three 6 Mafia.

The terms of the settlement were not shared with Digital Music News, but in addition to substantial financial compensation, DJ Paul and the other 3 members of Three 6 Mafia — Crunchy Black, Juicy J, and Gangsta Boo — will all receive writing credits for “No Bystanders.”

The lawsuit cited a pair of rationales. First, it stated that the chant within “No Bystanders” had a “cadence and sound” that was very much like the one on “Tear Da Club Up.”

Second, the suit cited the fact that Scott — when he performed “No Bystander” at the 2019 Grammy Awards — even changed the lyrics of the song to those used in “Tear Da Club Up.”

According to DJ Paul, he and Scott settled the suit soon after it was filed. He says that Scott called him, and the two quickly resolved the matter with amicable terms. He further stated that Scott was cool about the whole thing and was willing to make things right.  In other words, the opposite of beef.

DJ Paul now believes that it was never Scott’s intention to infringe on his copyright.

He says that Scott thought that his record company had cleared the use of “Tear Da Club Up,” and the fact that they had not surprised him.  DJ Paul also says that he and Scott may collaborate on future songs, which just may include the use of other Three 6 Mafia songs.

That’s great news for Travis Scott and Three Six Mafia, but not-so-great news for the lawyers preparing for a fight (and lots of billable hours).

In September, Three 6 Mafia reunited for the first of three planned shows, which will feature not only DJ Paul and Juicy J, but also many of the group’s former members and collaborators. This includes Crunchy Black, Gangsta Boo, La Chat, Lil Wyte and Project Pat.